Below you will find a list of Forex Brokers highly regulated by different commissions and agencies. On one hand, strict regulatory authority ensures that company is legit and client’s funds are safe and securely protected. On other hand, certain credible regulators burden market participants with many trading restrictions. For example, due to the heavy CFTC interference, Forex Brokers in the USA offer very low leverage, don’t allow hedging and apply the FIFO rule. Trading Forex became quite a challenge for many US citizens since these limitations came into force. Meanwhile, regulators in offshore countries don’t tend to take such radical measures.

The forex market is a regulated financial market in many parts of the world. Regulation means that there are independent agencies that oversee the manner in which forex brokers conduct their business. These regulatory agencies also keep watchful eyes on the providers of the products traded in this market.

Regulators of the FX market fall into two categories. In one category, we have regulators that function as agencies of government, which backed by law to carry out their oversight functions. The majority of regulatory agencies found in the forex market are put in place by governments. However, there are also countries where there is a form of mixed, symbiotic regulation. This refers to a situation where there is a government regulator as well as an industry self-regulating body. Examples of countries where the mixed system exists is in the United States, where the CFTC is the government-established regulatory agency and the National Futures Association (NFA) is the self-regulating agency made up of representatives of the FX brokers themselves. Otherwise, the government-regulated agencies perform the oversight functions in the United Kingdom, EU, Australia, Singapore, New Zealand, Switzerland, Russia, etc.

Regulated forex brokers are issued licenses, which function as an authorization to market, sell and distribute forex and CFD trading products to prospective and substantive clients. The requirements that regulators have for their regulated brokers differ from one jurisdiction to another. This is why regulated forex brokers have been classified into 4 categories. 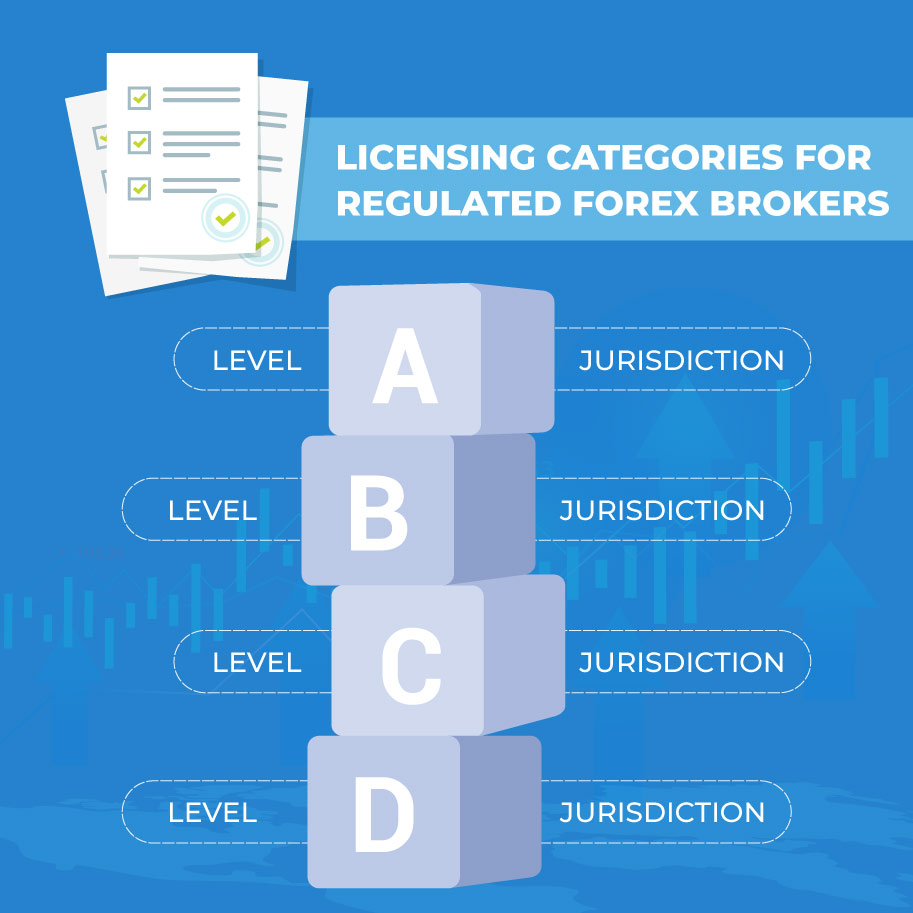 Here is a peek into each level of forex regulation:

Level A forex jurisdictions are considered to have the most stringent regulatory protocols for the forex market. Regulators in this category are the Commodities and Futures Trading Commission (CFTC) and the Japanese Financial Services Authority (JFSA). These two bodies regulate the US and Japanese forex markets respectively. Lately, the list has been expanded as other regulatory authorities have either copied the models of the CFTC or JFSA, or even gone beyond the scope of regulation offered by these two. We can now safely add the Monetary Authority of Singapore (MAS), Financial Conduct Authority (FCA) and the Australian Securities and Investment Commission (ASIC), as these two agencies have rolled out more stringent regulatory requirements since the first version of this article was written two years ago.

One factor common to the regulators classified as Level A regulators is that restrictions on the retail aspect of forex and CFD trading have either been stiffened or expanded. They continue to maintain the protectionist regulatory regimes of their countries, prohibiting the marketing and offering of forex brokerage services by offshore brokers. Changes to margin rules mean that for major and minor currencies, leverage is pegged at 1:30 and 1:20 respectively.

The regulated forex brokers in this category all have leverage caps in place on their forex and CFD products as defined by the regulators. Reporting standards are very strict and any form of infringements of the rules can attract very strong penalties/fines. Regulated forex brokerages in this category of licensing are also required to have plenty of operating capital. Even at that, the operating capital requirements have been increased.

Account segregation has now been recognized as a major factor that helps safeguard the funds of traders within a brokerage. Every Level A regulator has this requirement in place, and it goes hand-in-hand with the operating capital requirement. At no time is a broker supposed to deplete the segregated funds of one trader to pay off the capital requirements of another. So a broker must be well capitalized to handle these settlement risks.

In addition to the individual forex brokerages being regulated, those who work in such brokerages must hold specific industry-related professional qualifications. Attempting to work in the industry without the requisite qualifications can bring on very unwanted consequences. In countries like Singapore, such people can expect to spend some time in prison of caught.

In the two years since the writing of this article’s previous version, five more brokerages have joined Oanda and GAIN Capital on the CFTC’s regulated forex brokers’ list. You can check out what these brokerages offer by looking at their features in each broker's profile.

Regulated forex brokerages that operate under Level B licensing protocols include those that operate in South Africa and Cyprus. As the Financial Conduct Authority (FCA) and Australian Securities and Investment Commission (ASIC) have ramped up their requirements, they have moved up the ladder. The difference between the Level A and Level B regulators is that the Level B regulatory jurisdictions are less stringent when it comes to reporting and capital requirements. Furthermore, there are little or no leverage caps, which means that traders can still trade with leverage of up to 1:500 on some brokerage platforms. Account segregation is also mandated by the regulators under this class. Liquidity requirements are about $1m if the broker will act as a full market maker, and about $100,000 if the broker transfers fulfillment risk to prime brokerages (i.e. act as an ECN brokerage).

The new leverage caps and prohibitions on CFD trading implemented by the European Securities and Markets Authority (ESMA) affects the way brokers regulated by the Cyprus Securities and Exchange Commission (CySEC) can do business. Apart from the adjustments made in the leverage that can be offered to their clients, little else has changed.

This category features regulated forex brokerages found in Cyprus, New Zealand and Malta, where regulation is done by the Cyprus Securities and Exchange Commission (CySEC), Financial Markets Authority (FMA) and Malta Financial Services Commission (MFSA) respectively. There is an even lower level of reporting than is required for Level A and Level B forex jurisdictions. Any penalties imposed on the regulated forex brokers are also much lighter. The environment here for regulated forex brokers is a lot freer and is not as suffocating as is the case with the Level A jurisdiction. You also find country-specific regulators in EU countries such as FINMA (Switzerland), CONSOB (Italy), Russian Central Bank (Russia) and BaFIN (Germany). While those who work in the industry are encouraged to attain some qualifications (e.g. CySEC Basic and Advanced Level certifications in Cyprus), the kind of harsh penalties you see in Singapore or the US for non-compliance do not usually apply here.

These are the traditional offshore jurisdictions which are located in the Caribbean and Central America. Vanuatu, British Virgin Islands, Panama, Seychelles and St. Vincent and Grenadines are examples of countries that operate Level D forex regulation. There are individual regulators in these countries, but the conditions presented to brokers are very flexible. The goal is to attract business to these islands, which ordinarily have narrow windows for their sources of revenue. So the more forex business is attracted, the better for the governments in these countries. To make these areas attractive, the conditions found in Levels A-C regulatory jurisdictions are nearly non-existent. Paradoxically, traders who cannot operate under the conditions found in the US, UK and Europe have started to flock to these jurisdictions in numbers, attracted by the generous trading conditions offered by the brokers there. However, this comes with a big tradeoff; minimal investor protection.

Regulation of the forex market is meant to bring about protection of the consumers of forex products. However, there is always a question of balancing consumer protection with overall interest and growth of the markets. So while there is a general consensus that some level of regulation is good, there are dissenting opinions over how much regulation constitutes just enough regulation, or too much regulation.

The list of regulated forex brokerages presented on this page shows forex brokers that are scattered across the three regulatory levels described above. From what has been described, there are advantages and disadvantages to being regulated in certain areas. On one hand, application of regulation protects consumers by ensuring that only legitimate entities operate as forex brokers. On the other hand, there is also the worry that too much regulation will only serve to stifle the market. But even this supposed demerit is not an absolute demerit.

A good instance of this is seen in the Level A forex licensing jurisdictions. Regulation of the US market was tightened in 2010 by the passage of the Dodd-Frank Act, which imposed all sorts of limitations on forex brokers as to how much leverage they could offer, how much free capital they needed to have, etc. Prohibition of hedging and the FIFO rule were also added to the mix. This has resulted in a contraction of the US forex market, which by all available data has lost a significant portion of its market share to other locations. The number of forex brokers in that country dwindled from more than 40 brokerages in 2010, to just 3 in 2019. Though this number has expanded to 7 as at 2020, this is still a far cry from what the market used to be.

The same situation has played out in Europe. Forex brokers have seen their client base dwindle dramatically as traders who could not afford the new margin requirements, or seeking to avoid the CFD restrictions, have drifted to the offshore jurisdictions where these restrictive conditions do not exist. Presently, EU brokers, who are also now grappling with the loss of access to the UK market as a result of Brexit, are now pressing ESMA to review the regulations. The EU Commission launched a consultative process to this end, but the coming of the COVID-19 pandemic appears to have slowed the process greatly.

In Australia, forex brokers are already adjusting to the new reality that will take effect from March 2021, by launching offshore branches of their business. Retail clients who are unable to meet the new requirements are already being asked to switch to the global (offshore) branches of these firms.

These instances clearly show that while the regulators may have good intentions, these regulations are not helping the native markets grow. In contrast, the forex market in Japan is actually thriving, with volumes soaring year-on-year, even though the conditions under which brokers operate there are almost similar to what is obtainable in the US.

But as you head to the Level B and Level C jurisdictions, regulators of the forex markets have been able to find the right balance between consumer protection, and ensuring that the market continues to have the opportunity to expand.

Late 2020, the Australian Securities and Investment Commission (ASIC) decided to adopt the EU/UK model of regulation and decided to adopt the same leverage caps that were described by ESMA in 2018. These changes are to take effect on March 29, 2021. Other changes in the forex regulatory space have occurred. These are summarized below: