Below you will find a list of Forex Brokers regulated by the Financial Conduct Authority (FCA). The above-mentioned regulatory body controls financial firms registered in the United Kingdom and has powers to set trading standards in exchange markets, administer offered financial products, investigate organizations and individuals, oversee business activity of brokers and perform much more. If a company goes bankrupt, the FCA provides insurance coverage and takes actions to return determined amount of funds back to all clients. Forex Brokers regulated by the FCA considered to be very reliable.

Who are FCA-Regulated Brokers?

FCA forex brokers are brokers that operate in the UK forex market, and who are authorized and regulated by the Financial Conduct Authority (FCA). The FCA is one of the two regulatory bodies which replaced the Financial Services Authority, with the other regulator overseeing the banking industry.

The FCA falls under the regulatory oversight of the European Securities and Markets Authority (ESMA). However, the current Brexit situation does not provide a lot of clarity as to whether this oversight will continue to hold once the Brexit process is concluded. We have until October 31 this year to find out what happens but until then, ESMA continues to oversee the FCA and all FCA-regulated brokers will have to comply with the provisions of ESMA’s regulations as well as those of the FCA.

One of the new rules that has been enacted has to do with the issue of negative balance protection, otherwise known as guaranteed stops fulfillment. During “force majeure” events or market moving news that create extreme market volatility, it is possible or slippage to occur to the extent where stop loss settings placed by traders cannot be fulfilled fast enough. At these times, prices can move against traders’ positions, take out stops and continue heedlessly to the point where the negative position starts to liquidate capital that was not even committed to trades. If this situation continues unabated, all the capital in the trading account can get consumed, sending the trader’s account into a negative balance situation. It is a bit like falling into a bottomless pit.

This situation happened in the first trading day after the September 11, 2001 attacks and also occurred in the hours following the de-pegging of the Swiss Franc from the Euro on January 15, 2015. Unable to cover the slippage-induced losses, traders and brokers alike lost money across the world. In the UK, the impact was felt hardest as Alpari UK, one of the biggest forex brokers in the region at the time, became insolvent overnight.

One of the proposals debated and adopted by ESMA in 2018 to prevent a recurrence of these events was the implementation of negative balance protection by all EU and FCA-regulated brokers. Traders were to be warned ahead of time about assets to be affected during high volatility events (such as the Brexit vote), with traders asked to increase their margins if they needed to trade those assets. Furthermore, it was decided by ESMA that all FCA-regulated brokerages would have to guarantee to close out trades at the set stops to prevent their clients from incurring negative balances. This is a huge plus for traders who use FCA-regulated brokers.

Another plus for traders on FCA-regulated platforms is that each broker is to boldly show standardized risk warnings and also publicize updated data on the percentage of traders that lose money on their platforms. Apart from reminding traders on the risks they face when they trade, this information also tells a trader at a glance, just which platforms are harder to make money on. It goes without saying that if a product is offered for sale across several platforms and traders are losing more money on some platforms than on others, then the logical step would be to trade on platforms where the loss rates are lower. For instance, FXOpen (an FCA-regulated broker listed on this site) has a standardized risk warning which says that 57% of its traders have lost money on its platforms in the most recent assessment. There are platforms where close to 80% of traders are losing money. When you look at what FXOpen provides in terms of tools and resources for trading, you would discover that these are tools that make it easier to trade successfully when applied correctly. This puts the loss percentage figures in perspective and they then start to make some sense as to why the figures are lower than the market average.

There are other rules which are applicable: no bonuses to incentivize trading as well as the increase in the margin stop out levels from 20% to 50%.

What Can Traders Expect from an FCA-Regulated Broker?

The FCA has been championing consumer protection in the UK forex market with an aggressive stance. The FCA was the regulator that first began implementing client fund segregation, at a time when other regulators were seemingly uninterested in the cause. The end product of this process is the emergence of FCA-regulated brokers that deliver consumer protection standards that are arguably unrivalled in the world. 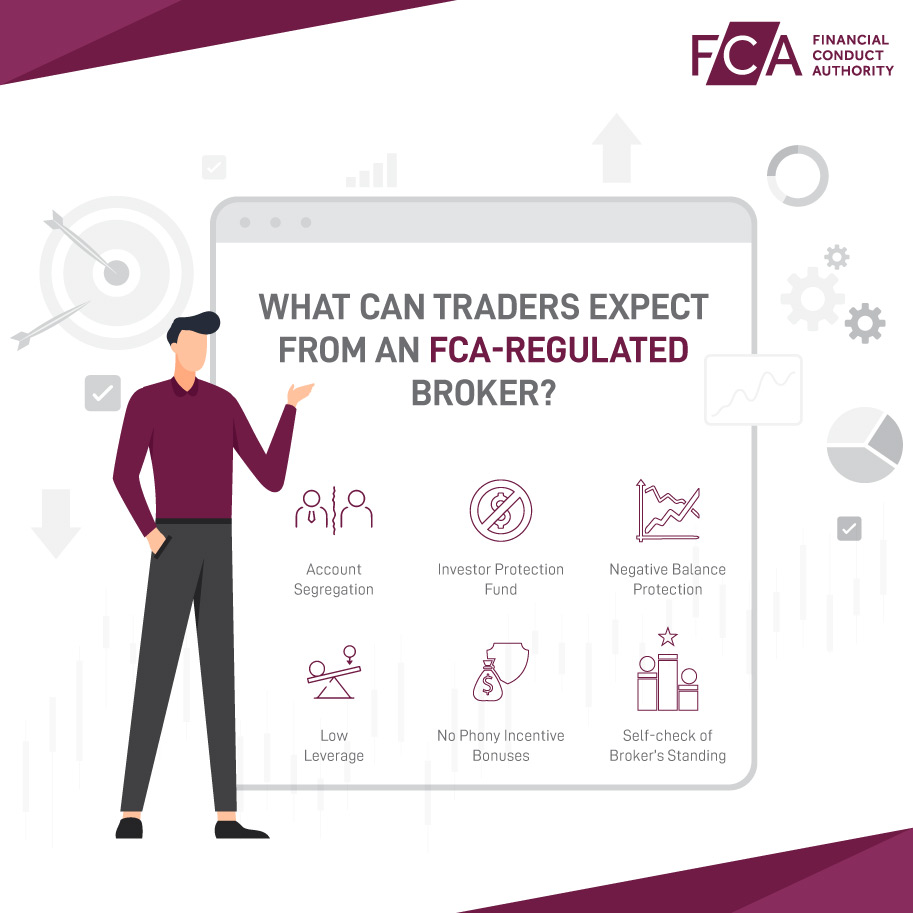 Here's a detailed list of what you usually can expect when trading with FCA-regulated brokers:

Client fund segregation has been at the center of the FCA’s customer protection program. This policy was put to the test when the Euro was de-pegged from the Swiss Franc by the Swiss National Bank. The market upheaval caused the collapse of Alpari UK, causing it to go insolvent in one night. As the brokerage went insolvent, segregated funds of traders remained unaffected and all traders eventually got their money back. The success of the FCA’s client capital segregation policy has led to this being adopted by other regulators across the world.

The FCA has initiated an investor protection fund known as the Financial Services Compensation Scheme (FSCS). This scheme was in place during the days of the FSA, but the compensation amounts have been increased and the compensation processes made more robust by the FCA. The funding for this scheme comes from mandatory contributions by all FCA-regulated brokers. This scheme was setup by the FCA to serve as the pool of funds from which investors who are aggrieved and found to have been shortchanged by their brokers after an FCA-mediated investigation, are compensated to the tune of 50,000 GBP. So if you operate a trading account with an FCA-regulated broker, you get access to this facility.

With the negative balance protection clause, all traders with FCA-regulated brokers can be sure that any losing trades would be closed out at the set stop losses without fear of incurring negative balances due to slippage.

FCA-regulated brokers are bound by ESMA’s new regulations to provide low leverage, which is 1:30 for forex majors, 1:20 for forex minors, 1:5 for volatile assets such as stocks CFDs, and 1:2 for cryptocurrencies. In other words, it will be more expensive to trade on FCA-regulated brokers than elsewhere (except on EU platforms which operate under the same leverage restrictions).

Trading with an FCA-regulated forex broker means that you will not get any incentive bonuses at all. You are expected to come up with all the money to be used as capital.

It is possible to check the status of any FCA-regulated broker by using the broker’s name on the online search register provided by the FCA.