Below you will find a list of Forex Brokers that allow users to deposit and withdraw funds (usually via cryptocurrencies) without the need to go through KYC (Know Your Customer) procedures. This makes it possible to trade more or less anonymously in a variety of markets, whether it is Forex or CFDs based on for example stocks or commodities. A no KYC broker is particularly useful for traders in countries where Forex trading is restricted, or for people who for other reasons don’t want to go through the hassle of having their identity verified. An additional benefit is that traders using this type of broker don’t need to hand over potentially sensitive personal information.

What is KYC and what is it for?

KYC stands for Know-Your-Customer or Know-Your-Client, which is a set of procedures and protocols that are put in place by financial institutions to verify the identity, source of funds, and residences of their clientele.

KYC procedures became popular and virtually compulsory following a string of terrorist attacks in the 1980s, 1990s and culminating in the September 11, 2001 attacks by terrorists at the World Trade Center in New York and other locations. The events were linked to a common denominator: the movement of funds to locations where they could be easily accessed for illicit activities. Most regulators now require financial institutions to keep a dossier on their clientele and the movement of funds through their accounts.

Forex brokers qualify as financial institutions since they are a repository for traders to warehouse their trading capital. However, the emergence of distributed ledger technology in 2009, which gave rise to the cryptocurrency market and crypto-based derivatives trading, has altered the landscape significantly. One of the hallmarks of crypto trading, and indeed, the whole essence of distributed ledger technology, is to disrupt conventional finance. It means taking away the institutions' power to see what you do with your money and putting it all back in your hands.

KYC is not necessarily a bad thing and it may even be necessary in some cases. But the truth is that many people find KYC very intrusive. In some countries, repressive governments have used it as a tool for hounding political opponents. Other countries prohibit foreign currency trading for reasons best known to them.

The majority of people who trade are people who want just to earn an additional income. It is pointless to think that someone with $500 or $2,000 to trade must be a potential terrorist whose every financial move must be watched. Most movements of illicit funds and terrorist financing usually involve millions of dollars and not $500. So there is really an argument for those who want to trade to be able to do so without intrusive KYC procedures. In some countries, banks have been instructed to institute KYC requirements for those with a certain degree of transactional volumes on their accounts while excluding those below the threshold from these requirements. If this can be implemented in some jurisdictions, it should be possible to locate no-KYC forex brokers.

Who are No-KYC Forex Brokers?

No-KYC forex brokers are brokers that offer the opportunity to trade FX and other CFD assets without requiring KYC verification or documentation from their clients. They can do this because they offer a payment channel that does not involve traditional banking institutions; cryptocurrencies.

Trading with no-KYC forex brokers allows for more anonymous trading of FX and CFD assets. In addition, traders living in countries with restrictions on FX trading or whose accounts are vulnerable to government-driven restrictions that border on citizen oppression and not a legal interruption of illicit fund flows will benefit from no-KYC forex brokers. If you are also opposed to giving away sensitive financial or personal information, then a no-KYC forex broker should be your choice.

How Does the KYC Process Work? 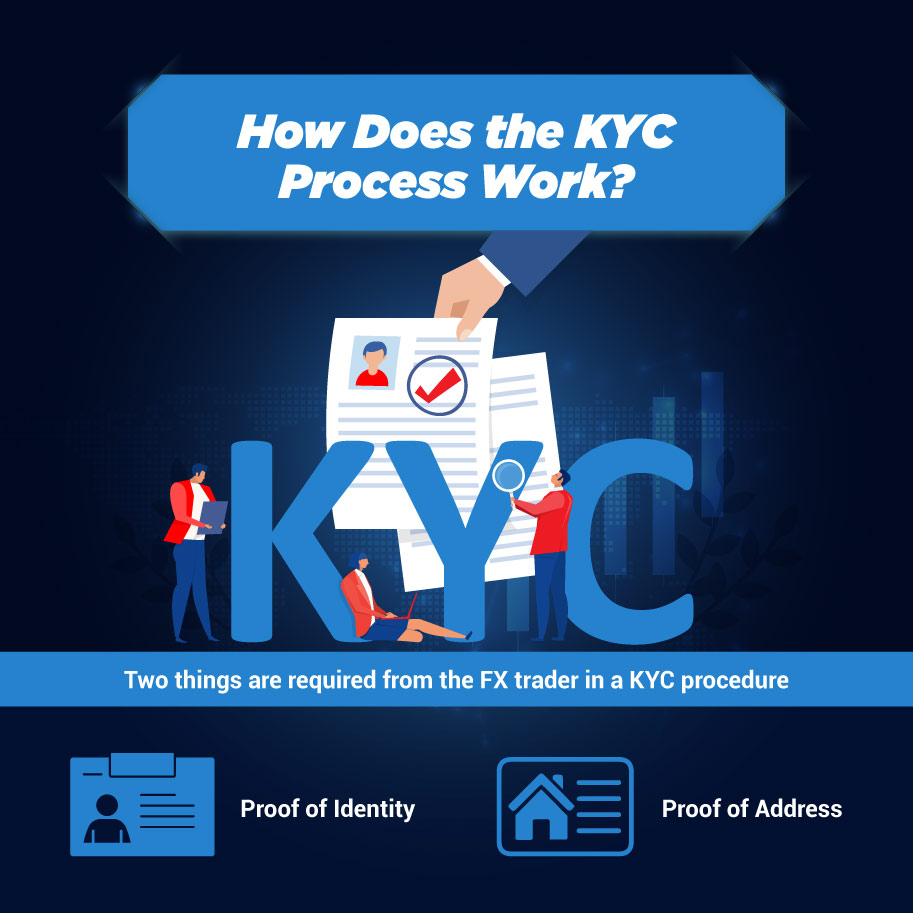 Two things are required from the FX trader in a KYC procedure:

The international passport is the gold standard for documentation used to prove an individual's identity. It is a government-issued document and therefore is regarded as sacrosanct proof that traders are who they say they are. Some brokers would request a driver's license or a national ID document. Since this is not a universally accepted document, the international passport is the widely accepted proof of identity.

Proof of address is a document showing that you live in a registered location. Documents accepted here are utility bills (phone, electricity, and water bills), bank statements and credit card statements.

These used to be the only KYC requirement brokers. Still, in later years, some banks and financial institutions have placed other requirements such as dated selfies, video calls, card statements, photos of credit/debit cards, etc. These have put additional strain on traders, some of whom have had active trading accounts suspended and funds frozen for not promptly providing these documents.

Some countries have been classified as "high-risk" in terms of illicit financial flows using nebulous criteria. Some countries have become international pariahs because of sanctions regimes that smack of double standards. Traders from such regions find themselves fighting institutionalized discrimination. For instance, card transactions from some countries are allowed but blocked in others. Traders from some countries can deposit freely with credit cards, but others cannot. Defunct Alpari UK had a discriminatory policy where traders from its internationally generated list of "high-risk" countries were required to submit notarized ID documents. In contrast, traders from countries outside this list could submit the documents without notarization.

Some of the familiar e-wallet companies are part of this web of geographical profiling. Many of them have shocking discriminatory practices. Traders have had their funds seized for no just cause. Then there is also the matter of data leaks. Many big tech companies that typically boast about having the latest cybersecurity protection have been subject to data leaks, some of them willingly done. Remember the Facebook and the Cambridge Analytica scandal?

Such institutionalized discrimination in a world that should function as principles of equal rights and access for all has led to calls for the abolition of the current KYC system. The advent of distributed ledger technology and the development of cryptocurrency tokens as a new payment system that bypasses the conventional financial system has led to a new generation of FX brokers known as no-KYC forex brokers.

Who is a True No-KYC Forex Broker? 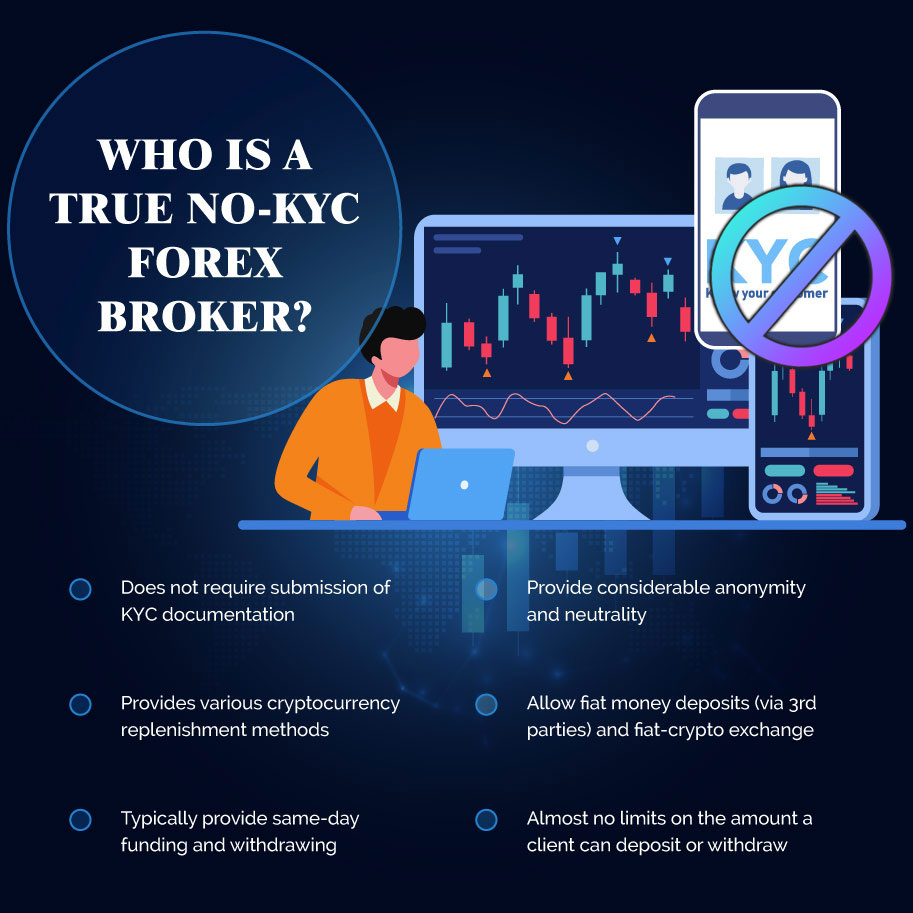 Here are the main points and features of no-KYC brokers:

What are the advantages of trading with no-KYC forex brokers?