This trading strategy is not like others you will find online or anywhere else, because it is a strategy that has been used exclusively by the institutional traders and is only being exposed now by some guys who used to be part of the system but are now running their hustles privately.

Have you ever setup a trade that you were sure was going to end up a profit, only for it to reverse against your positions? Does it feel time and time again like you are being watched? Then you are not alone. This is a common complaint of many retail traders. Many have been taught to “trade the breakout” or trade the break of trendlines. But not every break of a trendline is a true break. Not every price move that seems to be a breakout actually is. Some of them are simply stop-hunting traps that have been set by the institutional traders, looking to lure unsuspecting retail traders into the net, just in time to get slaughtered.

Forex is a zero-sum game. The money of the 95% of retail traders who lose money usually goes to the 8 big banks that control 70% of daily forex trading volume. That is why they declare billions of dollars in profits, and all retail traders have to declare is one blown account after another.

The Concept of the Three-Phase Strategy

The concept of the strategy is derived by understanding the three phases of price movement in the market:

The contraction phase indicates a period when the market is in consolidation, marked by a tightening of the market with narrow ranges. This period is marked by low institutional volume. During this period, the institutional traders are working out the next move.

The expansion phase is when the institutional traders start to “accumulate” or amass positions. What happens here is that they deliberately do two things:

- If the institutional traders want to ultimately sell, they reverse the process described above. They force prices upwards to create a false upside breakout, but are in fact only baiting retail traders to initiate long orders so they can clear them off with shorts.

Once the institutional guys feel the time is right, they start offloading their positions. In other words, they start “distributing”. After forcing prices down, they start selling the positions they have bought at discounted prices. This drives prices upwards very aggressively and causes panic among retail traders, who are now caught on the wrong side of their initial short orders. They then start to sell in panic or their stop losses get hit. Seeing that they have been played, the retail traders now start buying, but at progressively higher prices, loading the institutional players with profits. The exit of the institutional players at the top of what is known as the trend-setting component of the phase, coincides with the period of maximum buying from the retail traders.

The same thing happens in reverse: after forcing prices up to bait retail traders into thinking an upside break is occurring, the institutional traders start to sell their positions at progressively lower prices, raking in the profits and exiting completely at a time that coincides with the period of maximum selling by the retail traders.

The strategy works on any time frame, usually from the 1-hour timeframe and higher timeframes. No indicators whatsoever are required.

Watch to see when prices are trading sideways. This can easily be seen on the charts as a period when the price is not making higher highs or lower lows. This forms a form of rectangle pattern, where the highs and lows can each be delineated with a horizontal trendline.

Next is to wait for a drop in price that resembles a downside break. This is the phase of expansion that is primed to lure in retail sellers into the “bear trap”. It is when institutional traders start amassing buy positions.

Watch out for a bullish reversal candlestick pattern. This is the indication that the institutional traders are now getting ready to make the killing by offloading the positions they bought at discounted prices at much higher prices. Aim to enter the trade at the open of the next candle following the reversal candle. See snapshot below.

Some may argue that the period of expansion here was quite long, and would have allowed those who went short initially to profit. This case here is an exception, not the rule. The short trade example shows the opposite.

More often than not, the expansion phase may turn out to be very small indeed. This “bull trap” usually does not last long when the intention of the institutional traders is to sell the asset. As you can see from the snapshot, there was a small contraction phase, a small expansion phase and finally a very aggressive trend-setting phase that saw the currency pair sold off very hard indeed.

If you have entered long thinking that price had broken northwards from the contraction phase, you are probably going to be out of luck very quickly. 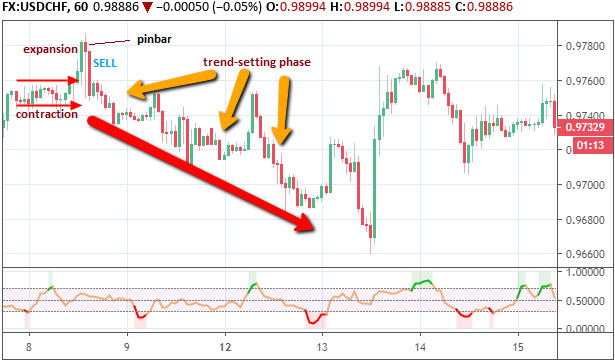 On this chart, we see again that the pinbar at the top of the expansion phase signaled that it was time for the currency pair to be sold off by the institutional players.

By simply observing the charts and entering only when the pinbar has signaled the end of the expansion phase, you will probably have more success with your trading endeavor as you trade with the big banks and not against them.