Today’s strategy involves the use of the moving average indicator (various periods) as well as the Fibonacci retracement tool. This strategy is built to be an intraday strategy, but there are times it could extend into the next day before the trade objectives are fulfilled. The target profit usually does not extend beyond 30 pips.

Here are the indicators that are used for the strategy:

Other tools such as the support and resistance areas formed by the candlesticks will be used alongside these indicators to add a price action-based dimension to the mix.

The use of the 200-day moving average is to provide a dynamic support and resistance level that can be tracked on a long-term basis. This is a widely used support/resistance tool in the forex market because of its high degree of accuracy. This tool allows the trader to know when price action is approaching a dynamic support or resistance level. This level could be an area where price action experiences a turning point. As we shall show in this strategy, there will be occasions when the trader should either use the tool to avoid trade entry or use the turning point shown by the 200-day moving average as further confirmation for the trade entry. We shall showcase this in one of the three examples we shall show below.

The Fibonacci retracement tool is used to set up the trade entry on the 15-Minute chart. After setting up the other indicators on the one hour chart and the moving average crossover has occurred, the price candles are allowed to retrace against the moving average lines. The Fibonacci retracement to is applied on the 15 minutes chart from the nearest swing price levels in order to detect possible entry points. The Fibonacci retracement level that corresponds to recent highs (short entry) or recent lows ( long entry) is used as the entry point for the trade. The trade setups below demonstrate how to use the strategy to go alone or to short the currency pair. 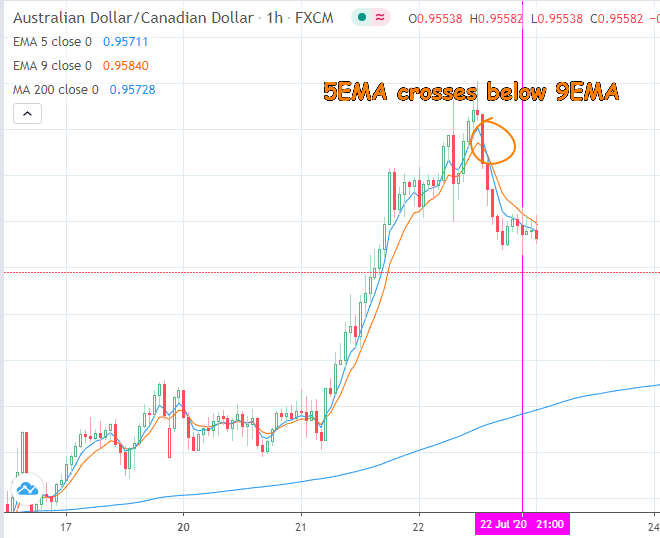 Here, we can see that the blue line of the 5-day EMA crossed below the orange line of the 9-day EMA and then both lines started to head downwards. At some point, price began to retrace against the moving average lines. It is at this point that the traders should switch to the 15 minutes chart. 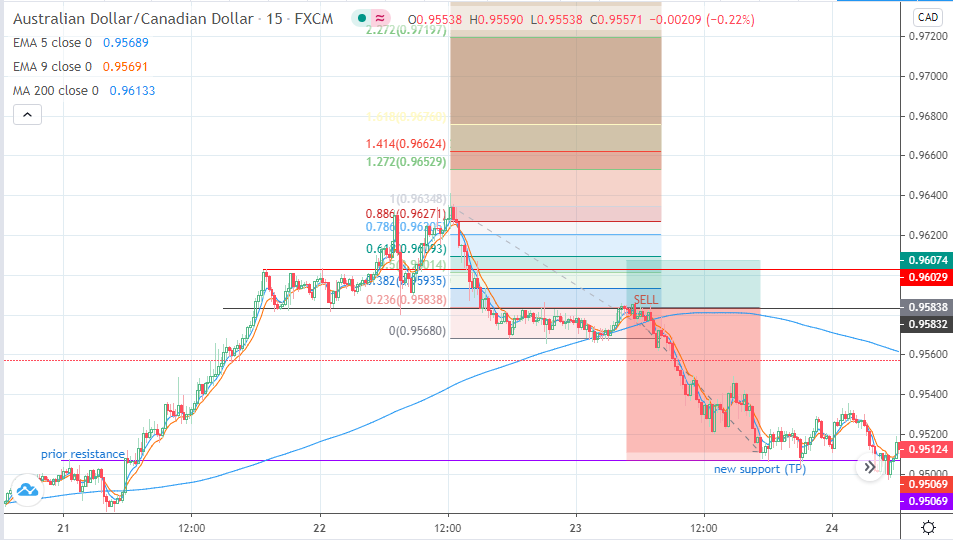 There is a previous resistance which was broken as price went upwards, on the left side of the chart. This is what forms the new support that will be used as the Take Profit point (0.95069).

The Fibonacci retracement was applied to the market top the previous day (the closest swing high) and traced down to the point where the downtrending price started to turn upwards. We can see that the 23.6% Fibonacci retracement level corresponded to a previous support which had been broken as price went downwards, thus forming the point at which the SELL trade was set up (0.95832). The Stop Loss was set above a previous area of resistance located at the 0.96029 price level.

The long trade setup is the opposite of the short trade and is set up as shown below. In this example, the 200-day simple moving average comes into play during the trade setup. 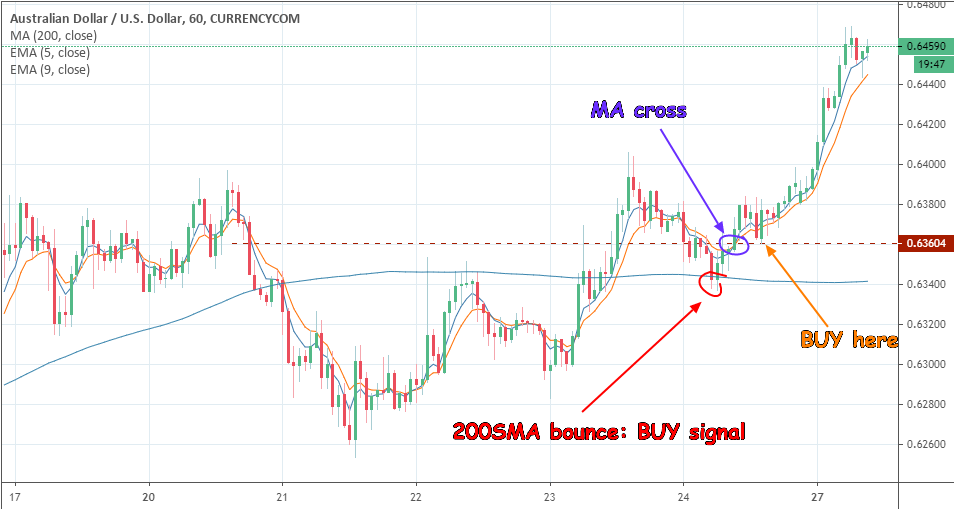 5EMA Crosses Above the 9EMA After A Bounce on the 200-day SMA: Buy Setup 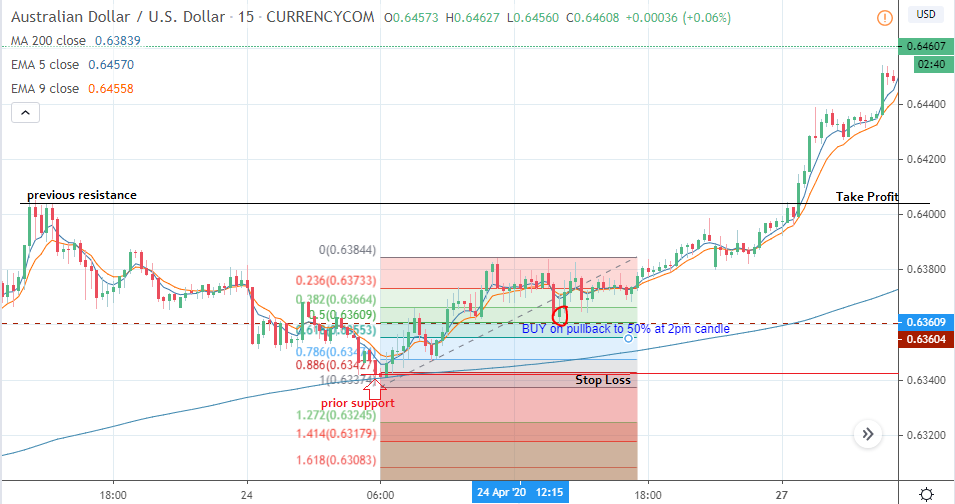 On the 15 minutes chart, we can see that the price action retraced to the 50% Fibonacci retracement level at 0.63604. If you look closely at the chart on the left hand side, you will see that this was an area where the price had previously found resistance until the upward price action broke above this level and turned this resistance to a new support. This new support was the 50% Fibonacci retracement level and that is where the BUY entry should be made.

The Take Profit level corresponds to a previous resistance that you can see on the left side of the chart. The stop-loss is set below an area where previous support was found towards the lower end of the chart. Incidentally, the 200-day moving average on the 15-Minute chart intersects this area, which confirms it as a valid stop loss level.

This has been a description of the moving average crossover strategy which deploys the Fibonacci retracement points as the entry tool. Practice this strategy on your demo account until you gain mastery of it.