At the end of the trace, the trader will have a trading line that extends into the future, which will provide the basis for trades until the price leaves the channel.

Setting Up the Chart

You can use charts from MetaTrader or from Tradingview or any other good interactive charting software. The charts are setup as follows:

Visually identify a section of the chart where price is trending up or down, then apply the channel tool and see if this channel will fit the highs and lows as described above.

The High trade is used to benefit from upward price movements and is setup as a bounce trade off the channel support line when prices are trending upwards. The following parameters must be met in initiating the HIGH trade:

These conditions are displayed in the chart that we have shown below: 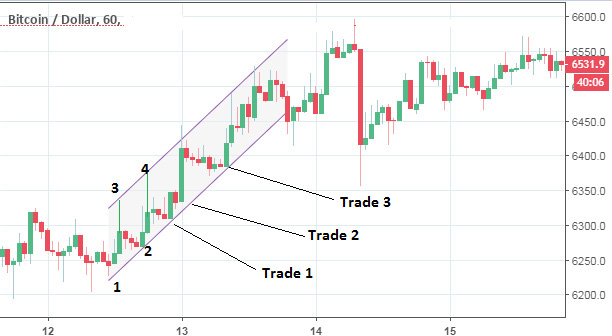 This setup is based off a 1-hour chart and reveals that the upward channel actually provided a minimum of three trading opportunities for the HIGH trade. The trace of the channel was able to identify two price lows, which provided the basis for future trades. In this example, the day provided three trading opportunities which would all have ended in profit. The essence of using channels that show direction means that you can get profits from properly executed setups.

The “Low” trade is used to benefit from downward price movements and is setup as a price rejection off the channel resistance line when prices are trending downwards. The following parameters must be met in initiating the LOW trade:

These conditions are displayed in the chart that we have shown below: 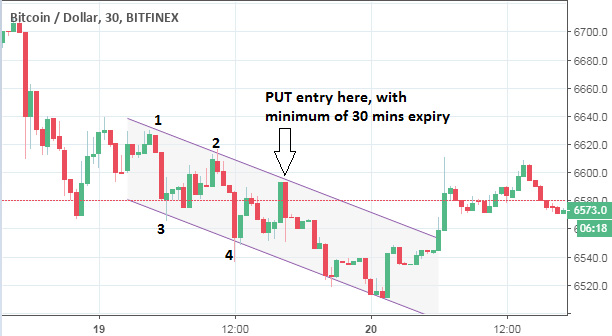 The expiry time for each trade is also a critical component of the trade strategy. The strategy with expiry times is to allow enough time for the trade candle to move into profitable territory. Several binary option platforms have various policies for expiration times. Some allow traders to set their own expiry times, while others provide a list of available expiry times from which traders can make a choice. The 15-minute, 30-minute and 1-hour expiration times are available for use within the context of these two scenarios.

All setups described above should be practiced on a demo account before being used on a live account.