The order types used for this strategy are the entry stop orders (buy stop for long position and sell stop for the short positions). This is done to prevent premature entries which could ruin the trade.

The strategy is built to work with the daily chart. Therefore, you can expect the position to be open for a few days from start to completion.

Similarly, when price is entering the triangle from below, it will end with a bullish continuation. So when price is reversing from a double bottom, it is expected that the price will extend its move upward from the triangle.

After price has entered the triangle, the next step is to use any one of these parameters to get the confirmation for the trade entry:

A setup that resembles what has been described above is shown below. 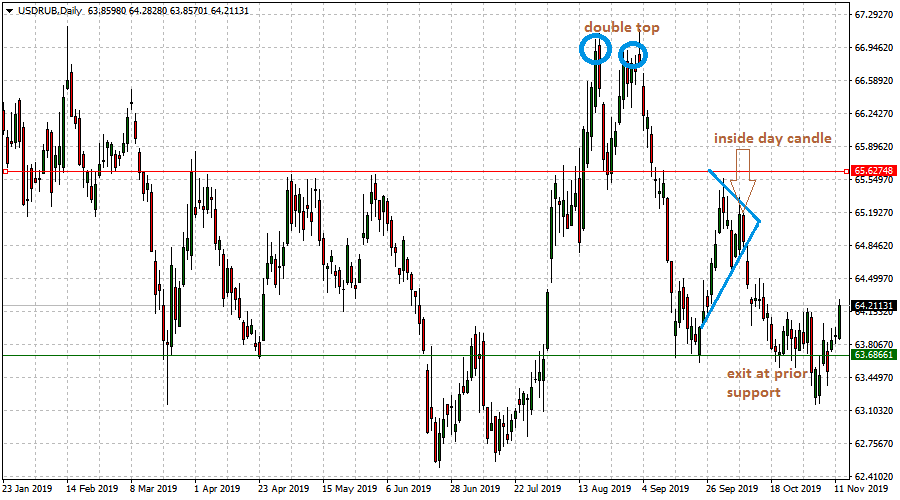 First, we see a double top which signaled the end of the uptrend in the USDRUB daily chart. Price subsequently dipped and went into the triangle. After a brief consolidation within the triangle, an inside day candle formed (see blue arrow), which preceded the downside gap that confirmed the continuation of the downside price action on the pair.

We can also see that the 63.6272 price level was a previous support on at least three occasions. This is why that price level would have been a good place to exit the trade. A trade like this would have made some good money with a sound risk-reward ratio.

For a long entry setup, the following need to be seen on the charts to complete the setup:

The chart below showcases a typical setup for a long trade entry. 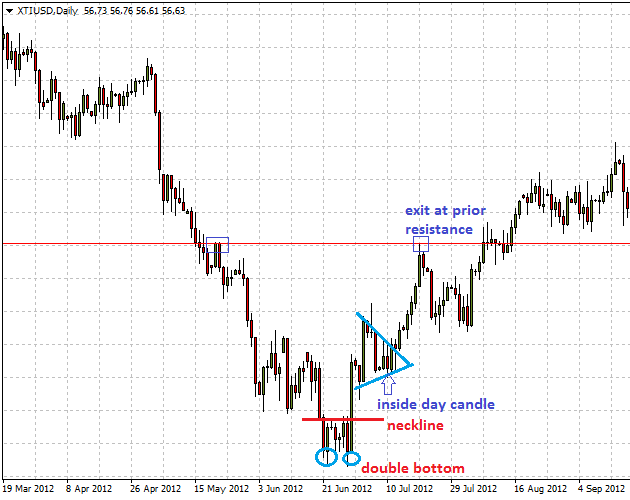 Here, we can see that the double bottom ended the downtrend. Price broke the neckline to confirm the double bottom, after which it entered a period of consolidation which formed the symmetrical triangle. The inside day candle signified that it was time to prepare for a breakout, which eventually occurred.

The takeaways from this strategy are as follows:

This trade setup requires patience as it takes several weeks to setup and may also take some weeks to resolve fully from trade entry to exit.