This strategy shows how to trade a short-term or mid-term market reversal using price action that is based on the Fibonacci numbers. This strategy is known as the 1-2-3 reversal pattern. Being a reversal pattern, it can occur at the top or bottom of a price move in the short-term or mid-term. The basis of the 1-2-3 reversal pattern is to identify a point of price weakness which manifests as what is known as the “failure swing”. A failure swing occurs when a re-emergent price move fails to make the previous price of the initial move in the same direction. This strategy will therefore show how to identify the failure swing when it occurs as well as the use of the Fibonacci numbers/ratios to confirm the relevant price moves when they occur. This strategy will be traded on the 4-hour and daily time frames. 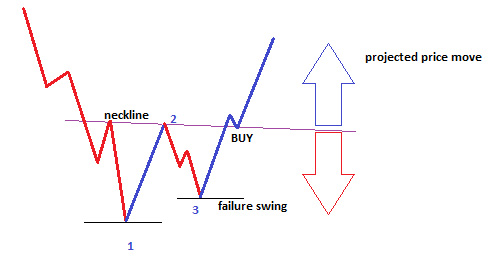 It can be seen that none of the price waves are actually straight line waves, but the wave patterns tend to look like the 3-wave and 5-wave subdivisions of the main wave patterns as described by the Elliot wave principles.

Here are some important points to note about the 1-2-3 reversal patterns.

The snapshot below demonstrates the short trade setup. First there is an initial uptrend move, which terminates at a peak. This wave is known as wave 1 (long blue arrow).

Once price has started to reverse at the end of the 3rd wave, you should wait for a break of the neckline. In this case, the breakout candle closed below the neckline, with a brief pullback up to the broken neckline when the next candle opened. At this time, the neckline which used to be a support level, performed a role reversal to become a resistance. Price reversed down all the way from there.

Note the slight increase in sell volume. Also note that the projected price move was almost exactly the same height as that of the vertical distance from wave 1’s peak to the neckline.

So for a short trade, initiate a Sell Limit order, using the neckline price as the entry price. Set the stop loss above the neckline, and the TP should be set using the height from peak of wave 1 to the neckline.

The long trade follows the same principles, but results in an upward reversal and break of the neckline to the north. In the long trade setup, volume confirmation is an integral part of the strategy and must be sought for before initiating any orders that follow price to the upside.

The chart shows the initial price wave 1, which is actually a major impulse wave with 5 smaller waves (yellow arrows). We can also see how price evolved into wave 2, the failure swing at wave 3 and the upside reversal which was accompanied by a marked increase in buying volume. Also note the projected price move to the upside, where the price move from the neckline slightly surpassed the vertical distance from the trough of wave 1 to the neckline.

The long trade would therefore be a Buy Limit at the neckline price (if there is a pullback to the broken neckline) or a Buy order at the open of the next candle following the breakout. The TP should be set at a price that conforms to the distance from the trough of wave 1 to the neckline, projected upwards from the neckline break point.