What is Tapering? How does it affect currencies in the FX market?

Tapering is the gradual reversal of a series of policies that a central bank has hitherto implemented on an emergency basis to stimulate economic growth.

These policies that constitute what is known as quantitative easing or QE include (but are not limited to) the following:

Quantitative easing is implemented when a central bank must act quickly and comprehensively to prevent cataclysmic economic collapse. The 2008 global financial crisis and the 2020 COVID-19 pandemic are two events that had serious economic fallouts on a worldwide scale, necessitating quantitative easing.

As desirable as quantitative easing in preventing such economic disasters, it comes at a considerable cost and is ultimately not sustainable over a long period.

These reasons are why central banks will ultimately withdraw the policies they put in place as part of quantitative easing in a gradual fashion, in what is known as "tapering."

Tapering will ultimately reverse the effects of QE in an economy, with implications for the local currency of the country implementing the policy.

Tapering allows the economic and financial ecosystem to adjust to a higher-interest-rate, lower-money-supply environment gradually. Sudden cessation of QE would cause a huge shock to the financial system, which is why a central bank's withdrawal of such stimulus must be made gradually, which is what QE tapering is all about.

Effect of Tapering on Currencies: The US Dollar’s Example

Tapering is a form of control of the supply of a currency. Whenever there is a stimulus program in place by a central bank, the supply of the local currency is increased. By the laws of demand and supply, a higher supply of an item diminishes the value. Therefore, stimulus programs tend to weaken currencies over time. Another weakening effect seen in a stimulus program is the low-interest-rate environment. Interest rates are kept low during a quantitative easing cycle so that the cost of credit becomes cheaper. This enables more expansive access to loans from banks as more people will pay the interests when these are lower. Barriers to entry for accessing such facilities are also lower.

When a central bank starts to taper a QE program, the bank in essence, starts to cut off the excess liquidity from the system in a graduated fashion. Funding windows, loans, grants and unique credit windows start to get shut down. Tapering reduces the money supply in an economy. Furthermore, a by-product of excess liquidity is that inflation starts to creep in. When inflation creeps in, the central bank is forced to raise interest rates to curtail the liquidity that flows from banks to the system. The net effect of tapering is that the currency starts to strengthen over time.

In 2009, the US government instituted a quantitative easing program to deal with the economic fallouts of the global financial crisis. That crisis started with a systemic problem in the subprime mortgage market in the US. The situation had a local origin and spread globally. Therefore, the Federal Reserve's QE program came in to deal with the domestic fallout of the crisis. With the onset of this program, the US Dollar weakened significantly against gold and other currency majors tied to commodities and risky sentiment (Euro, Canadian Dollar, Australian Dollar).

Tapering of the 2009 QE program commenced in January 2014. By October 2014, the Fed stopped all asset purchases and closed the special funding windows, marking the end of that program. Here is the performance of the US Dollar against gold between 2009 and 2013. 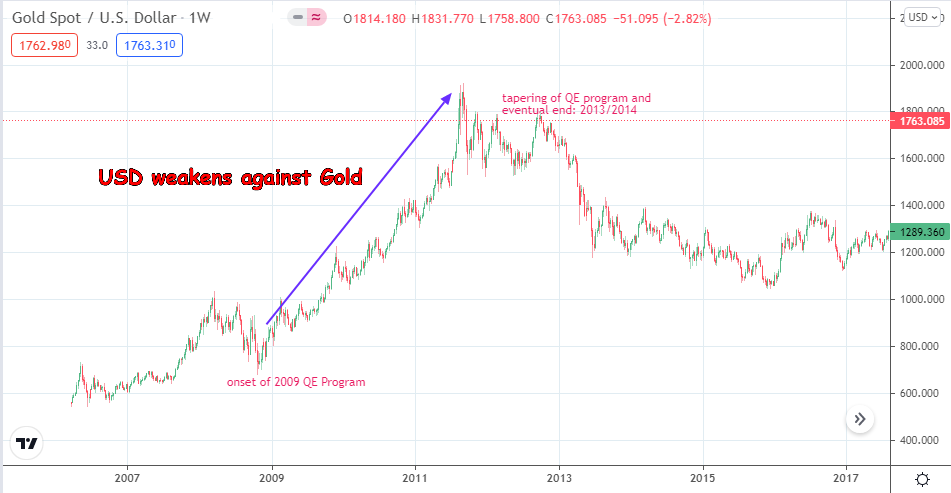 What Happens When There Are Several QE Programs Running?

The 2020 COVID-19 pandemic has brought about a unique situation not seen in the financial world ever. The global coverage of the disease forced several central banks into implementing quantitative easing programs simultaneously. Unlike 2009, we now have several major and emerging market central banks implementing QE in some form. The coming of the vaccines and the gradual reopening of economies around the world brings the question of tapering the QE programs back into the realms of discussion.

Due to the varying degrees of affectation by the coronavirus, and the differences in the pace of recovery from one country to the next, tapering by central banks will not be at the same rate or done simultaneously. This presents a new kind of trading opportunity for participants in the forex market.

Some engaging trade scenarios based on tapering have emerged as of writing. Australia and New Zealand were not as severely affected by COVID-19 as the US. This scenario has allowed for faster recovery in employment and other economic indices, prompting the Reserve Bank of Australia (RBA) and Reserve Bank of New Zealand (RBNZ) to define what could be the earliest tapering sessions of the major currency market economies. Just like we saw with the XAU/USD pair between 2014 and 2017, we could see trading opportunities in the AUD/USD and the NZD/USD, based on tapering or interest rate tightening.

The major markets are not the only ones on the cards. We also have the Nordic economies of Norway and Sweden, where the economies have done very well in coping with COVID-19. The Norges Bank is expected to start tightening monetary policy, and the Norges Bank’s Governor has already announced that there could be up to 4 rate hikes in 2022. Some banks are already looking at the EUR/NOK pair in this regard, as the European Central Bank (ECB) has made it clear it is in no hurry to end its Pandemic Emergency Purchase Program (PEPP). 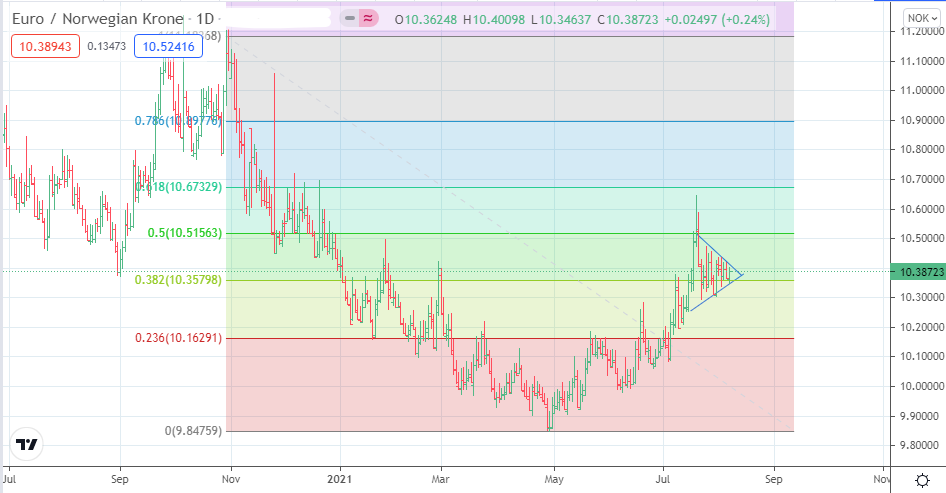 The resolution of the triangle on the EUR/NOK pair following a period of upside retracement from the downtrend could lie in the hands of the Norges Bank if it delivers on its promises.

Tapering the QE programs and the potential to raise interest rates by central banks worldwide will be the most important news that has dominated the currency markets for a long time. These events are responsible for the long-term trends that could play out in the next two years. There will be other news releases along the way, but these will be responsible for only short-term price movements, which will still occur within the context of the significant trends. Therefore, keep your eyes glued to your sources of forex news and learn all you can about tapering and how this action can help you profit from several currency pairs.