What is Fundamental analysis? Which economic news have the highest impact?

Fundamental analysis involves the use of the news to determine the long-term outlook for a financial asset. The news here refers to the political and economic events that are mostly captured in a schedule known as the economic news calendar.

The “fundamentals” of an economy are essentially captured by the economic and political news releases seen on an economic news calendar. Some other events outside of the calendar can also define the fundamentals of an economy. For instance, the announcement of trade sanctions on Chinese products by US President Donald Trump was not an announcement captured in the news calendar. Rather, it was a policy decision driven by the President himself, and which has impacted not just the economies of the US and China, but other economies as well. It has also affected certain segments of the local economy and impacted other news contained in the economic news calendar. Therefore, traders need to be aware of such extraordinary instances that could present themselves for use in fundamentally analysing an economy.

Ultimately, investor sentiment and perception of an economy are all defined by the news events used in fundamental analysis. Key events such as interest rate decisions typically affect the flow of investment into and out of an economy; all with consequences for the currencies of the countries involved as well as the national stock markets.

The basis of fundamental analysis is being able to trade the news. It must be mentioned that not all news items are captured in the economic news calendar. There are also some surprise political or economic events that cannot be captured in a schedule. In other words, “unscheduled” news can shake the markets. As a trader, you need to know how to respond to these unplanned events. They include unscripted statements from speeches of key economic and political players, a declaration of war, a terrorist attack or even a natural disaster.

How is a news trade taken?

Let us take an example here. We use a news event from Monday February 11 to illustrate the power of a high impact news item in shaping currency direction. The GDP and Manufacturing Production data for the United Kingdom was released at 4.30 am EST (9.30am UTC). The GDP month-on-month reading was expected to come in flat at 0%, worse than the previous figure of 0.2%. Manufacturing production m/m was expected to come in at 0.2%.

But the data came in with an actual reading of -0.4% for the GDP and -0.7% for the manufacturing production. Both results were bad for the British Pound, but what was it that made the news tradable? 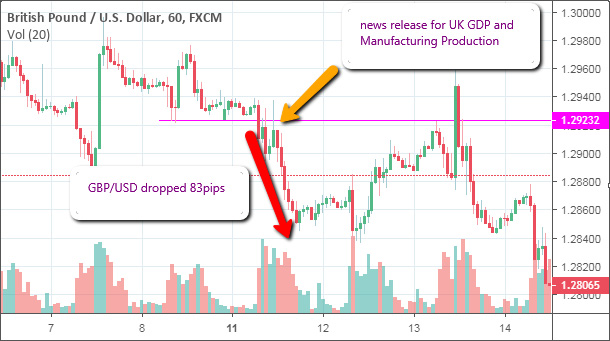 GBP/USD 1-hour Chart Showing Price Action on Feb 11, 2019 A discussion of how to trade the news cannot be covered here as it is a very technical subject which must be discussed in detail in another article. But suffice it to say that fundamental analysis is based on the news, which serves as the trigger for a trend. You will need technical analysis to determine the methodology of trade entries and exits.

What News Trades are Most Important?

In a nutshell, these are the most important news trades:

Notice that item C is captured in our example. The high impact nature of these data is usually shown (e.g. as a red icon) beside the news itself, on the economic news calendar.