Using Martingale Trading Strategy – Would You Make Profits or Just Lose It All?

The Martingale trading strategy is a strategy which doubles investment amount after a losing trade to recoup the previous loss sustained and turn a profit in the subsequent trade.

The Martingale strategy works on the principle of negative progression. What this means is that the trader aims to recoup any losses sustained using the next set of trades. This is done following a loss by increasing the trade volume or position size of the subsequent trade(s). Usually, the increase in position size is 100%, i.e. double the losing position at the barest minimum. You can either win or lose because those are the only outcomes for trading. Therefore, the expectation that the strategy would work is just 50%. This, in itself, shows that the system is badly skewed against the trader. If you have to commit double to a subsequent trade when the expectation of winning is just half, then this already has increased the trader’s risk and chances of losing it all.

Essential Considerations with the Martingale Strategy

When deciding to use a Martingale strategy, you have to consider some points very carefully.

The snapshot below indicates a Martingale strategy using a robot to trade digital options. Here, the Martingale size was a factor of 4. The initial buy price was $2.50 (trade volume), with a profit aim of $1.07 per successful trade based on this trade volume. 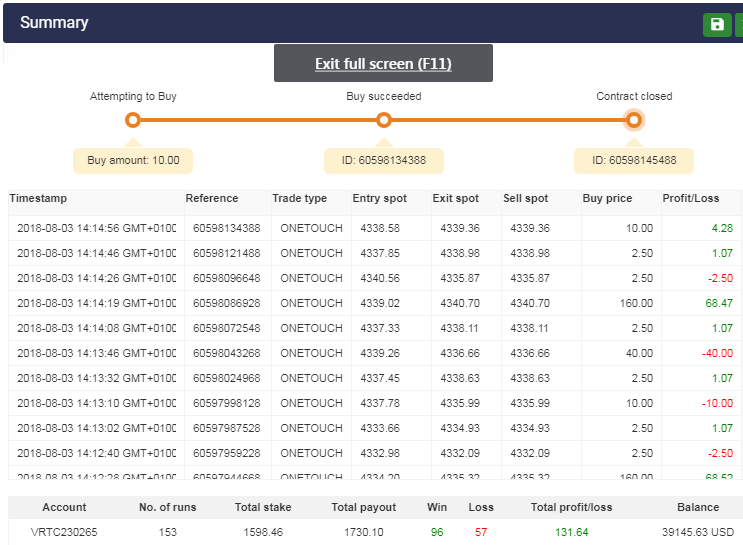 Notice that this account was well funded, and so its capacity to carry out increasingly higher-volume Martingale strategies was not tested to the hilt. This is not always the case. Most traders can only afford a few hundred or a few thousand dollars, and there is a limit to how long they can continue to apply the Martingale strategy. Sometimes, there can be just too many losing trades that using a Martingale strategy is no longer possible. At this stage, the trader is forced to give up with massive losses on the account. There is a limit to how much capital a trader can risk in executing a Martingale trading strategy.

Martingale System in the Forex Market

The example taken above came from the digital options market, which has fixed payouts and an "all or none" outcome approach to each trade. The forex market is different because profits or losses are not decided on an "all or none" basis. Outcomes are variable, so the degree of loss or gain also varies. This factor introduces other parameters into the mix, such as the RRR or risk-reward ratio as well as position sizing.

When it comes to position sizing, You must understand that the use of the Martingale strategy will go against the rules of risk management. For instance, most experts in Trading agree that not more than 3% of the account capital should be used in all open trades. Suppose you commit 1% of your capital into a trade and you lose that money: your Martingale strategy will demand that you at least double the capital while maintaining the same trade parameters. This practice yourself already pushes the boundaries of acceptable risk percentage exposure. Anything further and the rules of which management will effectively have been thrown out of the window. Therein lies the dilemma of the Martingale Trader. However, there is a work-around. This is where the risk-reward ratio comes in.

Using high risk-reward ratios allows you to sustain more losses than wins to a certain degree and still come out profitable at the end of the training period under review, which could be up to a month. For instance, if you use a risk-reward ratio of 1:3, and you please 30 trades in a month, You can afford to lose 18 trades and still come out profitable. This is because you would make a ratio of 36 pips in profit to 18 pips as a loss. You see yourself eliminates the need to use a Martingale strategy to recoup losses. But if you have to use a Martingale strategy, you have to increase your profit target to counteract the increase in capital allocation for the trade to be used with the strategy. At the same time, you could also reduce the number of pips you use as your stop loss. Eventually, your risk-reward ratio could be something like 0.5:2 (i.e. 1:4) or 0.5:3 (1:6). In other words, you would have increased your risk-reward ratio, and at the same time, the number of pips used in your trade would be lower. If the trait is no loss, you would not have lost too much more than normal in monetary terms. If the trade ends up as a winner, the profits gained will compensate for more future trades than usual, if those end in losses. So instead of 1 profitable trade covering 3 losers with a 1:3 risk-reward ratio, you would have one profitable trade covering up to five or six trades even if the number of pips in the Stop Loss have been cut down.

This is about the safest way to use the Martingale trading strategy in forex.

Martingale Trading Strategy: Profitable or Not?

There is no single way to deploy the Martingale strategy that is risk-free. Sometimes you just have to apply some common sense. The use of the Martingale strategy is fraught with risks. Personally, only a few traders can afford to keep doubling or tripling or quadrupling their money without limits. Most retail traders cannot do this. If you run out of money while trying to rescue your account from his two losses with a Martingale strategy, the entire system crumbles. Losses can be very damaging, and when they start to rack up, it becomes harder to recover the account. Even if you get away with it the first time, there is no guarantee that it will work the second or third time. As the Martingale trading system is ultimately unsustainable because of capital limitations, it's just really hard to profit with this system.

The decision here is straightforward. You are more likely to lose it all in the long run that profit from it. It is advisable to use a system that works better with lower risk.