This article aims to discuss how bond yields, interest rates and gold prices are connected. The relationship between these three assets is profiting a few traders. But we hope that more traders will come on board with this information to change the narrative.

To understand the connection that gold price has with bond yields and interest rates, the nature of these assets needs a brief explanation.

What are bond yields? Bond yields are the returns on investment on a debt instrument known as a bond. Bonds could be government bonds or corporate bonds. Among government bonds, there are federal, state and municipal bonds. Federal bonds are the ones commonly listed for trading in the secondary market. Examples of government bonds are the US Treasury Bills, UK Gilts, German BUND, etc. The US Treasury Bills are the most popular. There are various maturity times. Long-term bonds (10-year and 30-year maturity) usually draw more market attention. Apart from paying higher returns on the investment (i.e. have higher yields), long term bonds also show greater sensitivity to changes in the national interest rate of a country.

The earnings or returns accruable from holding bond investments is known as the yield. The bond yield is calculated by dividing the value of the yield by the interest it pays.

Bonds are said to be conservative investments with a relatively safer outcome. Most governments that issue bonds as debt instruments will usually honour their commitments. Defaults tend to be rare as no government wants to be seen as not trustworthy enough to honour obligations. Such a perception can be damaging.

In simple terms, the interest rate is the charge that is placed on the money given by the lender to a borrower after a fixed period of time. As far as the financial markets are concerned, the national interest rate is the charge applied by a central bank to money it lends to commercial banks and other banking institutions in a country. It is also the benchmark rate of return that a national government (via its central bank) is willing to pay when borrowing money in the form of bond assets.

Gold is a non-yielding asset that is used as a store of value and a haven to protect against inflation and adverse market conditions. When other traditional yielding markets such as the stock market start to collapse, the focus of market players turns from capital appreciation to capital preservation.

The fact that gold does not yield any form of interest or earnings, except if the price increases over time, is critical to the discussion of its interconnectivity with interest rates and the bond market. Traders who understand the concept of capital preservation and when it is applied can make some trading decisions on the XAU/USD pair that may end up being profitable.

So here is the relationship between these assets.

Gold is a non-yielding asset. It cannot earn the holder an interest. At best, the holdings become more valuable over time, which protects gold holdings from inflationary pressures. Traders in the financial market that seek capital appreciation do not buy gold because in this function, gold is useless. Such traders would rather buy bonds (safe investment) so they can earn from the bond yields. Bond yields rise when there is an expectation of an interest rate increase. When bond yields rise, it makes gold unattractive as an investment option and makes bonds an attractive investment vehicle.

In contrast, traders do not seek capital appreciation when the markets are in turmoil. Also, conditions of economic upheaval (such as the one brought by COVID-19) cause governments to drop interest rates. The aim is to make credit cheaper and more accessible, aiming to revive the economy. Bond yields at this time will drop, making bonds unattractive. At this time, capital preservation is the driving force behind market behaviour, and the demand for safe-haven assets such as gold goes up.

In 2021, from June 30 to July 29, the US 10-year bond yields fell from 1.63% to 1.26%. This came as the US Federal Reserve hinted that the conditions to raise interest rates from near-zero levels had not been met. This downward movement occurred within the context of a descending channel. 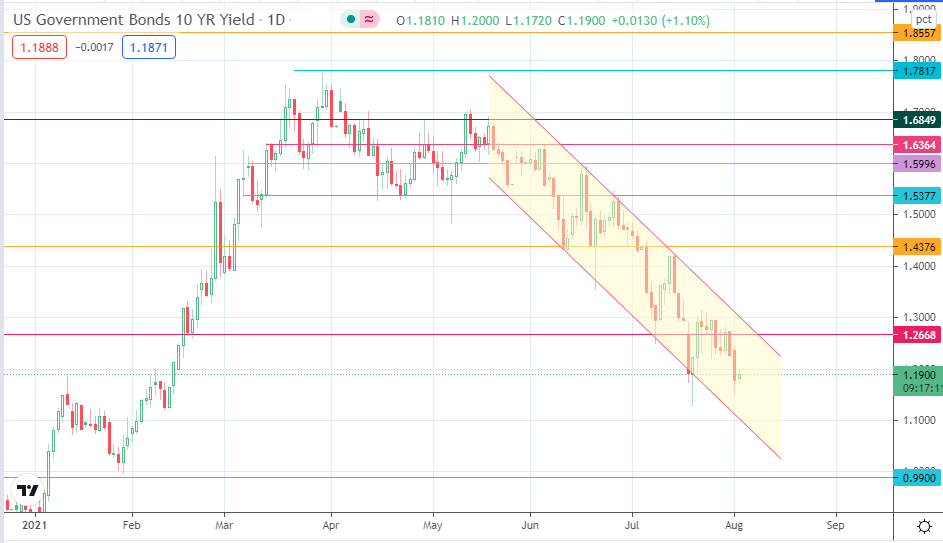 At the same time, the price of gold rose from $1763 to $1830. This move occurred in an ascending channel, showing the inverse relationship between gold prices on one hand, and interest rates/bond yields on the other. 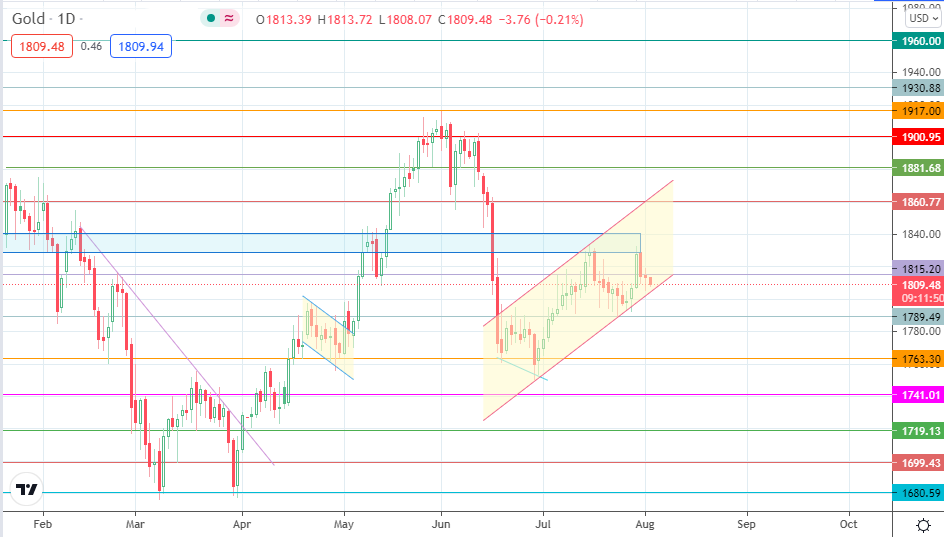