How to Detect Market Sentiment in the FX Market

The Basis of Market Sentiment

The basis of market sentiment in the forex market is the inherent nature of human beings to follow the crowd. Herd mentality operates in many spheres of life, and the forex market is not an exception. The extent to which a currency pair rises or falls in the FX market is a direct function of the sentiment. The level of conviction of traders towards a particular direction determines the volume of capital they are willing to commit.

A look at the Dow theory of trends in the market shows that this is a description of the impact of human psychology on price activity. Charles Dow describes the beginning of a trend as the stage of accumulation, which is when the institutional investors buy up assets. The accumulation stage is what causes prices to start rising when a critical tipping point has been reached. As prices begin to grow, we begin to see the stage of public participation, which is when more fuel is added to the fire by incoming hordes of retail investors. This new money serves to push the market even higher. By the time the market tops out and institutional investors start to dump the assets in the stage of distribution, the prices turn and will not really care if people were buying at the very top or not. What drives the decisions to buy or sell and when to do it, is determined by the traders' sentiment.

Bitcoin rolled around below $10,000 for the better part of three years until two institutional players started to buy billions of dollars worth of Bitcoin in the 4th quarter of 2020. This was because their sentiment towards the asset changed. Their move also caused a sentimental change, and before long, everyone began to buy Bitcoin. Similarly, Elon Musk got into Bitcoin with a $1.5billion play. That drove even more people into Bitcoin, and prices surged from 35K to nearly 60K. Once Musk decided Tesla would not accept Bitcoin anymore as a means of payment, contrary to their earlier announcement, the sentiment around Bitcoin soured, and the selloff started. Bitcoin is now trading even lower than Musk met it, somewhere around 32K as at May 23, 2021.

So How Do You Pinpoint Market Sentiment?

Some financial writers say indicators can measure market sentiment. Sure, some indicators such as the Volatility Index, CNNMoney's Fear & Greed Indicator, High-Low indicator, etc have been created to gauge market sentiment. However, those who have traded forex with hard-earned money will tell you that more often than not, you cannot use a bunch of programmed software to see what a bunch of traders think about a currency. How can an indicator tell what Goldman Sachs or Rabobank thinks of the EUR/USD?

The best way to detect market sentiment is to listen to actionable analysis and market commentary from notable FX websites and FX brokers with a market research department. Some of the brokers listed on this website have market research departments that interact with major banks and other players whose actions move the market and use the information they glean to produce actionable sentiment analysis. A typical market sentiment report includes the following:

Here is an example of the opening sentence of a market sentiment analysis report released on May 23, 2021, covering the USD/CHF pair.

"Analysts at MUFG Bank point out the Swiss franc has recently started to strengthen alongside the price of gold. They argue the move is driven more by building concerns over higher inflation rather than safe-haven demand."

This sentence already indicates what the prevailing sentiment is and what is driving it. Traders are currently long on the Swiss Franc, but not because of the traditional safe-haven plays. Instead, traders are buying the CHF because there are concerns that rising inflation will force the Swiss National Bank to start raising interest rates. Higher interest rates tend to push a national currency's value upwards because higher rates mean that the rate of return for instruments benchmarked against these rates, such as the government bonds, will also go up. This attracts demand for the national currency from external players who have to change their countries' legal tender for the currency of the land of interest, sending its value upwards relative to another.

However, currencies are traded in pairs. The most popular pairing of the Swiss Franc is the USD/CHF, which pits the Swissy against the US Dollar. Other pairs such as the EUR/CHF and GBP/CHF also exist. But a proper trade based on market sentiment has to combine a currency pair in which there is diverging sentiment. That is, one currency has a market sentiment promoting strength, and the other is promoting weakness.

At the time of the filing of the sentiment report for the Swiss franc, the US Dollar was also under pressure due to a different influence. This time, the Federal Reserve was responsible, indicating that they prefer to keep US interest rates low for a long time. The Fed is also opposing any tapering of the existing quantitative easing program.

Quantitative Easing (QE) is a set of policies and stimulus packages designed to restore confidence in a country's financial system: the capital market, currency, bond market, and the wider economy. Low interest rates and massive bond purchases are a standard tool used by the Fed as part of the QE program, and these have been in place shortly after the COVID-19 pandemic struck in March/April 2020. Now that the US economy is showing signs of recovery, the markets have been expecting a potential move by the Fed to reduce/tapering the extent of bond purchases and set a timetable for an earlier rate hike than the 2023 date set for this event. However, the apex bank in the US has maintained that it will not taper QE or raise rates earlier than planned, thus killing off demand for the US Dollar. So there is presently a situation where the greenback is weakening and the Swissy is strengthening purely due to opposing market sentiment for both currencies in the USD/CHF pair.

The result is that the USDCHF has weakened significantly in May 2021, and this move has not had anything to do with the economic news calendar! 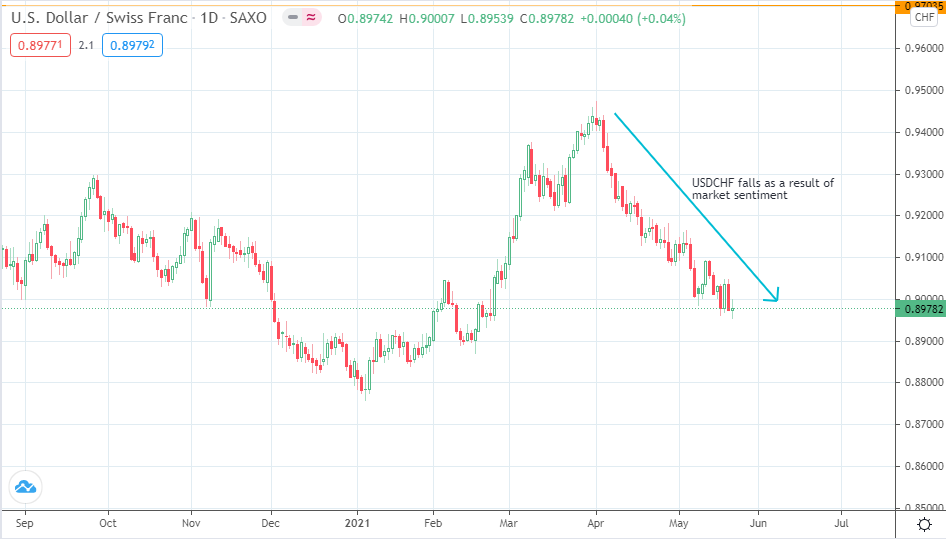 How to Combine Market Sentiment With Fundamental/Technical Analysis

With what has been written here so far, you can see that market sentiment is what dominates medium-term and long-term price movements. The market news, which is the bedrock of fundamental analysis, can either support the sentiment or go against it.

If the market news goes against the sentiment, this will deliver a retracement move but does not negate the sentiment. See this retracement as an opportunity to enter a trade that follows the market sentiment at a lower price. In other words, allow the contrarian market news to play out. Then use your technical analysis to find out where it is best to enter at a cheaper price.

You should also use the same sentiment detection methods to know when the sentiment around a currency pair has changed.