Two types of spreads exist in the forex market. These are known as:

Let us compare fixed spreads and variable spreads and see if we can come up with some similarities and differences. The table below summarizes the conditions that come with each type of spread. 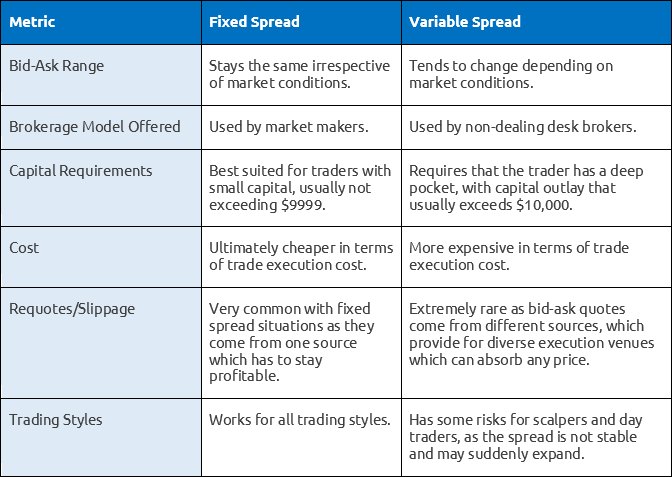 Each metric will be examined in detail.

When the spreads on an asset are fixed, it simply means that the difference between the bid and ask prices of that asset stay the same with the passage of time, no matter the market circumstances. Therefore, if the spread on the EURUSD is 2 pips, it will continue to remain at 2 pips no matter the prevailing market conditions.

On the contrary, when spreads are said to be variable or floating, it means that the difference between the bid and ask prices on a particular asset or security fluctuates with time, depending on the market circumstances. So if the spread at 7am on Tuesday on the EURUSD is 2 pips, the spread may narrow to 1.2 pips at 12 noon, or it may even widen at 7.02 am on the same day to 10 pips. Variable spreads tend to widen during major economic news releases, and narrow or contract when there is low liquidity.

There is a reason why market makers offer fixed spreads. They are essentially matching their clients orders to positions they have already assumed “in-house” via their dealing desk departments. They are therefore able to offer controlled pricing to their clients, which allows them to keep spreads fixed.

Non-dealing desk brokers have no control over their clients’ trades except in the aspect of order transmission. At the level of the interbank market or the prime brokers, there are usually many liquidity providers that offer different spreads for any single asset. The bid-ask range here is therefore subject to variation from market forces, volatility, etc. That’s why variable spreads are a feature with the non-dealing desk brokerages.

If you are subject to changing spreads which could widen during intense volatility, then it goes without saying that variable spreads lead to higher execution costs for the trader than fixed spreads.

Again, fixed spreads allow traders to count their cost before entering into trades. You know exactly what you are paying your broker even before you execute the trade. This is usually difficult with variable spreads, but because variable spread traders usually have deeper pockets, they are able to absorb the sudden spread changes better.

Traders who use fixed spreads are typically small time traders whose trading capital is not more than $9,999. Very commonly, you will find that many of these traders do not even have up to $1000 to trade with. Such traders would never be able to handle variable spread scenarios.

In contrast, variable spread traders usually have deep pockets as their brokers usually insist on large minimum deposits that usually top $10,000. This capital ensures that the traders involved can many such spread changes without losing their shirts.

Forex trading is characterized by different trading styles: scalpers, day traders, swing traders and position traders. The difference between these styles lies mainly in the duration of trades. Scalpers rarely stay in a trade for more than a few minutes. Day traders are in trades for a few hours and never exceeding one day. Swing traders are in trades for days to weeks, and position traders hold positions for months on end.

Fixed or variable spreads may not matter much to swing or position traders, but to scalpers and day traders, they mean the world in terms of profits or losses. Scalpers try to make a few pips at a time over many trades in order to earn a profit. For trades that are held for such a short time, the spread makes a lot of difference.

Let’s assume the scalper is trying to earn 10 pips on the EURUSD, with a fixed spread of 2 pips. This means that the scalper only needs to earn 12 pips to achieve the target. However, the game changes when variable spread brokers are used. Assuming the scalper wants to earn 10 pips and on execution finds that the spread has widened to 8 pips on the EURUSD: what happens? The scalper would then need to make 18 pips to achieve the profit target. Therefore, the decision to use fixed or variable spreads can impact the profitability of your trading styles or strategies very quickly.

So whether you choose to trade with fixed spreads or variable spreads, you should know what each style offers you so you can plan your trades accordingly.