All About Sniper Entries in FX Trading

A sniper entry is a trade entry that does not acquire a drawdown. Usually, it is an exact entry just at the bottom of a market for a long trade or at the very top of the uptrend for a sell trade.

The name "sniper" is given to this trade type because of the precise, exact nature of the entry. When you attain a sniper entry, the trade wastes no time in heading into profit territory without acquiring any drawdown. In other words, the trade does not run into negative territory before it turns positive.

The best sniper entries usually come off support or resistance.

How Can You Get Sniper Entries in Trading?

In practice, it is difficult to call an exact market top or market bottom. For this reason, sniper entries are not usually made by trying to find a trend reversal point. If the price action keeps moving in the trend direction, such trades will end up on the losing side.

Instead, it is more prudent to catch the sniper entries as retracement re-entries. In other words, it is best to use retracement levels to attempt to pick when the retracement/countertrend moves will end within the context of a major trend.

In a news trade, the writer has also found that a stop entry level can be moved manually directly on the MT4/MT5 chart with mere seconds before the news is released and the trade kicks in. However, there is an element of risk as a whipsaw can also take out any stops.

Take a look at the snapshot. This is from a 5-minute chart of the GBP/USD. Notice how every 5-minute candle in the area of interest seemed to come off the 1.18800 price mark. This point tells you that this price level is a preferred buying point at that moment. If you wanted to achieve a sniper entry, that would have been the perfect place to initiate it. Notice how the price action took off from this price level without dropping below the 1.18800 price mark.

This article will describe two types of sniper entries

All entry setups shown here come from the 5-minute chart.

This is the sniper entry strategy used to trade a breakout. As the name implies, the trader waits for the price to break a key resistance/support, then allows for a pullback to retest the broken price level, which now reverses roles to allow for a new entry in the direction of the break. A break and retest strategy works very well when trading the resolution of chart patterns such as wedges, triangles, rectangles, flags and pennants. 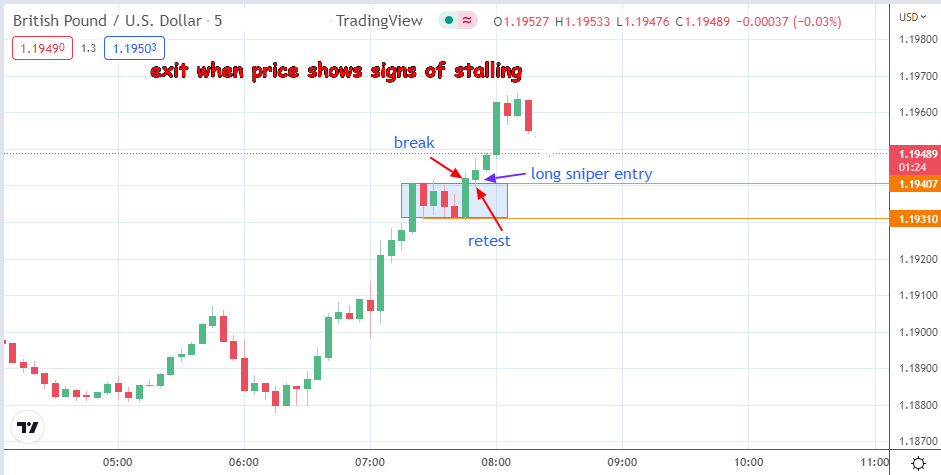 This example shows a break and retest sniper entry from the rectangle pattern. The "break" candle closes above the rectangle's upper border. The next candle pulled back to this broken border, now serving as a resistance point. Price action subsequently took off from this border with a drawdown that did not exceed two pips.

A trader using the break and retest sniper entry strategy must ensure the trade is not left for too long until it starts to reverse against the position. The drawback with this strategy is that the exit from a profitable move is very subjective, unlike the retracement sniper trade, which presents a precise tool for exiting a position. If you are using a chart pattern, follow the pattern's measured move rules to determine an appropriate exit point.

The preferred retracement levels for this sniper entry type are the 61.8% or 78.6% Fibonacci retracement levels. At these levels, any market participants sitting on the fence would generally consider the asset to have moved to cheaper levels to initiate a re-entry into the trend. 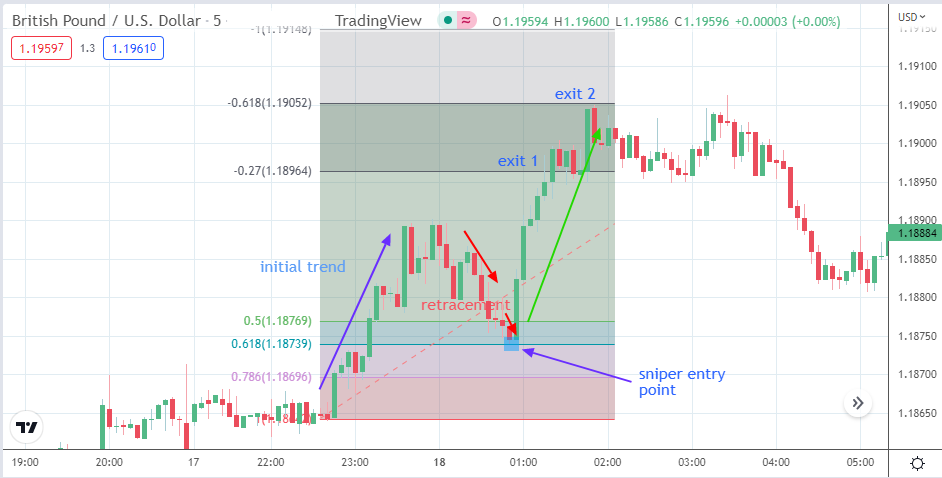 The settings on the Fibonacci retracement tool have been adjusted to display the 50%, 61.8% and 78.6% retracement levels and the 27% and 61.8% extension levels.

As the chart shows, an initial uptrend move occurred from 1.18650 to 1.18900. These points served as the swing low and swing high for the trace of the Fibonacci tool. The application of the Fibonacci retracement tool at these price swing points brought up 1.18739 as the 61.8% Fibonacci retracement level. This served as the sniper entry point for the long trade, ending at the 61.8% Fibonacci extension level. This setup was a perfect sniper entry as there was no drawdown whatsoever.