Shiba Inu (SHIB) is Facing a Massive Development – Where is the Perfect Buying Point?

Shiba Inu Developer Shytoshi Kusama announced the launch of 10,000 NFTs on the ShibaSwap exchange as the name of “Shiboshis.” Currently, the new product release is available for LEASH holders. Moreover, anyone can change the name of Shiboshi by burning SHIB. Therefore, with the burning of SHIB, the circulating supply of SHIB tokens will drop, indicating an upside pressure in the SHIB/USDT price.

On the other hand, the social interest in SHIB and DOGECOIN has dropped by almost 90% since May 2021. Despite the drop, the update in the ecosystem may trigger a rally for the SHIB/USDT price. More than 660,000 SHIBholders are waiting for the October 2021 update, where the launching of Shiboshis is the primary sign of the network’s development.

Besides, Shiba Inu holds a strong position in the coinmarketcap rankings, where the future development might open rooms for price appreciation. 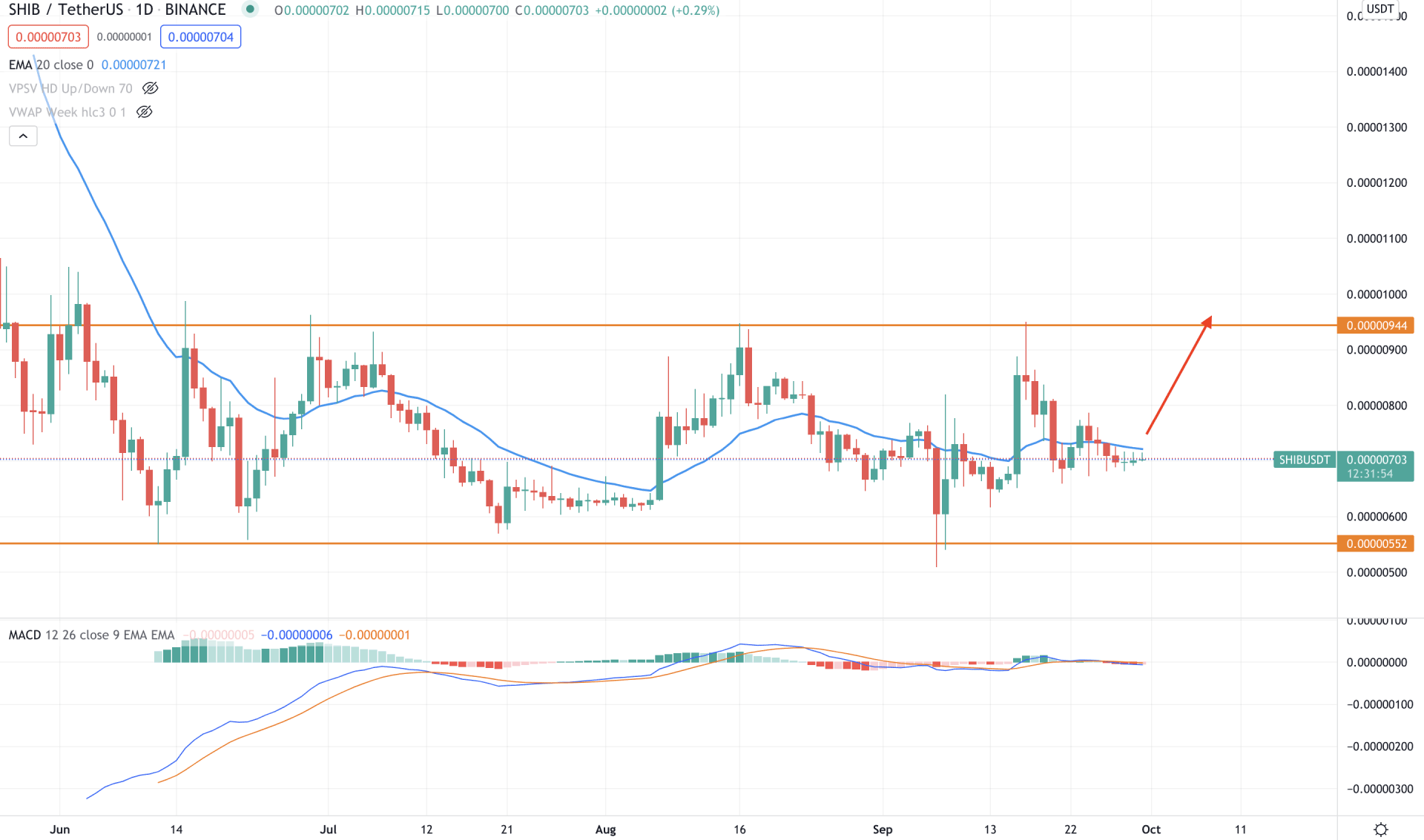 In the above image, we can see that the SHIB/USDT price is trading below the dynamic 20 EMA with extreme corrective momentum. Moreover, the price became indecisive for the last few days, which might initiate a breakout. Meanwhile, the MACD Histogram remained corrective where solid price action is needed for finding a direction.

Based on the daily chart, the price is within a correction, where a bullish daily close above the dynamic 20 EMA might open rooms for testing the 0.00000944 resistance level. On the other hand, a bearish correction with a bullish rejection from the 0.00000552 level would be another opportunity for bulls. 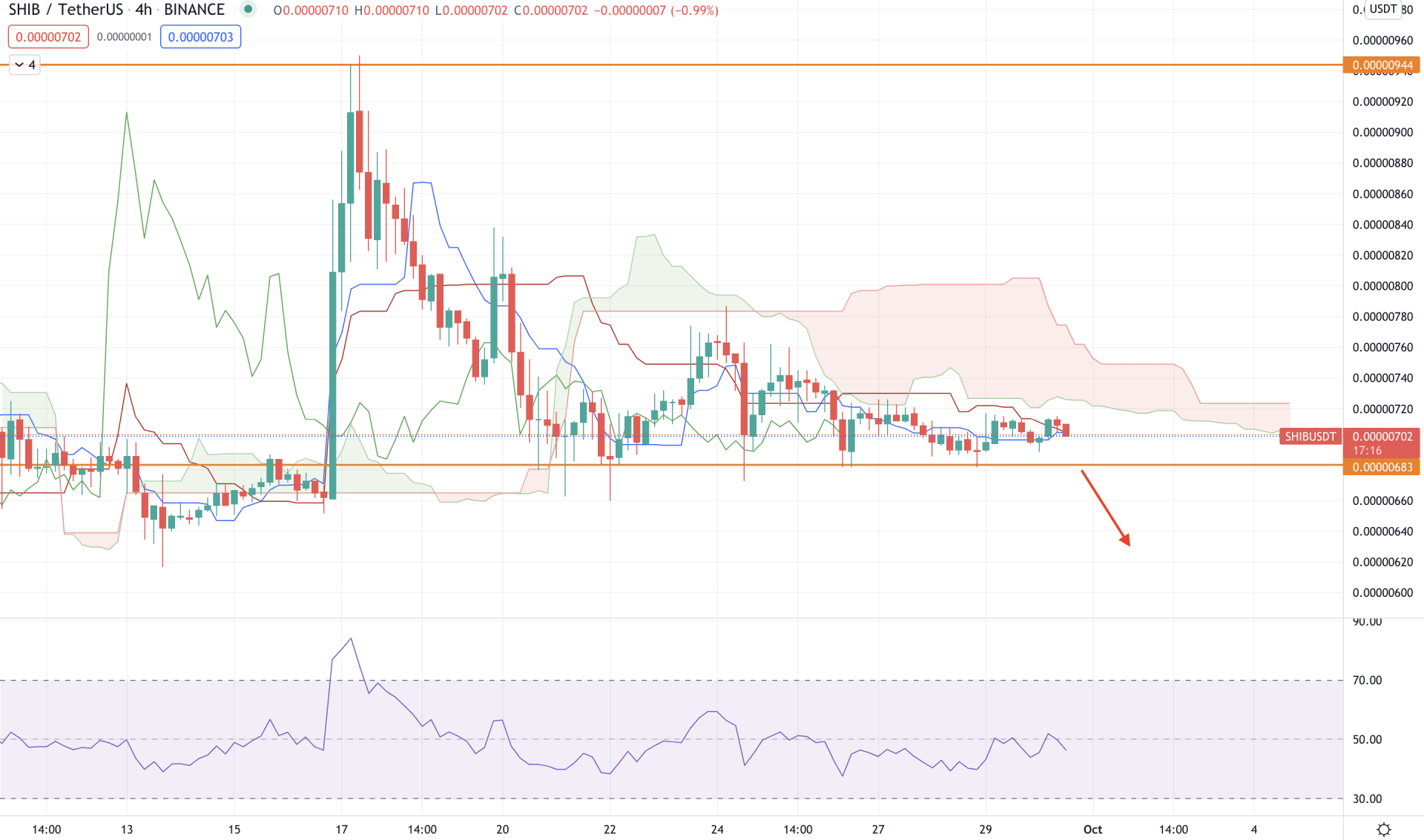 In the H4 chart, SHIB/USDT is trading within a strong bearish trend as the price moved below the Kumo Cloud with a corrective momentum. Although the price showed impressive buying pressure on 17 September, it failed to breach the 0.00000944 resistance level. As a result, the price moved down but remains still above the breakout level.

The above image shows that the future cloud remains bearish where Senkou Span A is below Senkou Span B and aiming lower. Meanwhile, the price is corrective where a potential crossover appears between Tenkan Sen and Kijun Sen. Based on this structure, a bearish H4 close below the 0.00000683 may initiate a strong bearish pressure in the price towards 0.00000550 level. However, a bullish pressure above the 0.00000740 level with an H4 close may alter the market structure and increase the price. 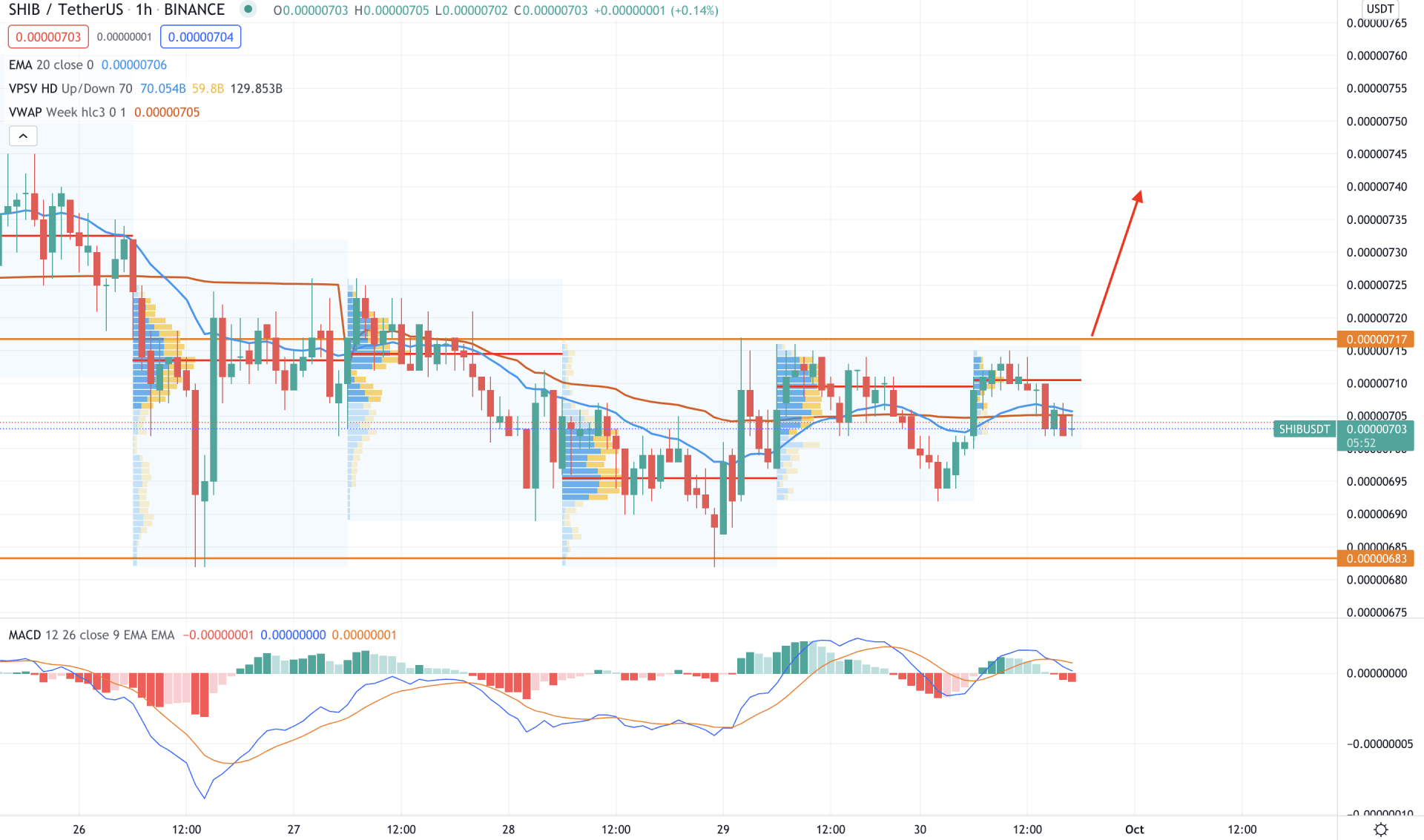 SHIB/USDT is running within a corrective momentum in the intraday chart, where the most recent price moves below the intraday high volume level of 0.00000710. Moreover, the dynamic 20 EMA and weekly vwap is a minor resistance to the price, pointing out a selling pressure.

The above image shows how the price is trading below the flat vwap with an H1 close. Meanwhile, the MACD Histogram turned negative and aimed lower, another sign of possible bearish pressure. In that case, the price is more likely to make new lows towards the 0.00000683 support level in the coming hours.

Based on the H1 context, bulls should find the price above the 0.00000717 intraday resistance level to rely on an upcoming bullish pressure towards the 0.00000944 area. Moreover, a failure to break below the 0.00000683 with a bullish H1 close above the dynamic vwap would be another bullish possibility for this instrument.

Should You Try Buying SHIB/USDT?

As of the above discussion, trading in an instrument like Shiba Inu requires a HOLDing approach where investors might carry losses for a considerable time. However, based on the possible development, SHIB/USDT can show a bullish surge. In that case, any bullish rejection from an intraday dip of 0.0000068 or 0.00000552 would be a potential buying opportunity.