Litecoin's Post-Artificial Surge – Where the Price is Heading?

It’s been a week, Litecoin surged higher by 30% from $174.14 level to $231.11 level as soon as a tweet was posted regarding Litecoin’s collaboration with Walmart to use Litecoin as a payment method to all Walmart stores across the country. The news came from the GlobeNewswire and was deleted after finding no authenticity of the source. However, within a short time, the price visited the moon and rebounded lower immediately on the next H1 candle.

The situation is over now as the price moved even lower, followed by the selling pressure in the broader cryptocurrency market where Bitcoin is struggling to hold the momentum above the $41500 support level. In that case, LTC/USDT has a higher possibility of coming lower. Still, the current hash rate of 347.65 TH/s with increasingly active and new users indicates mass adoption of this coin. 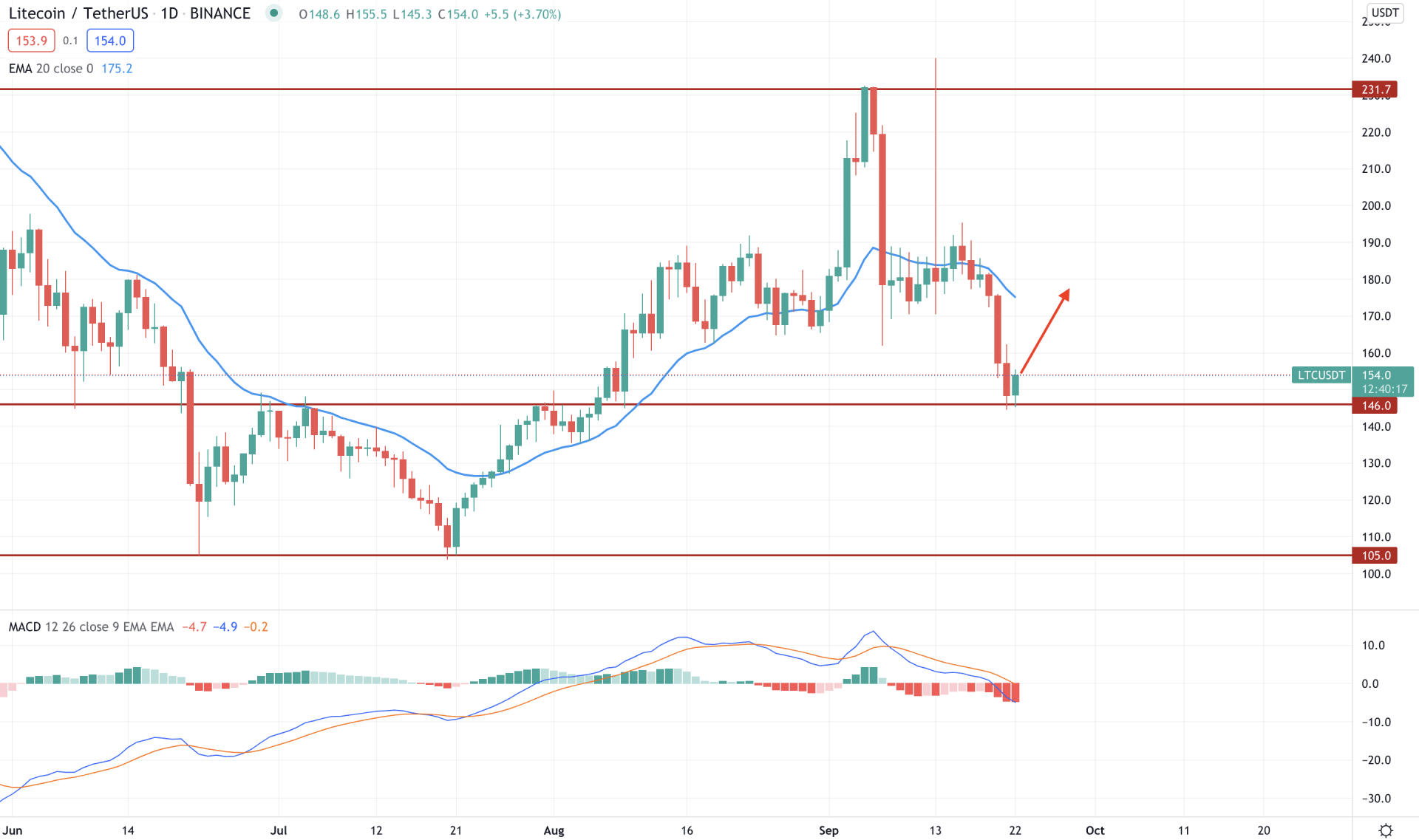 LTC/USDT found a bottom at 105.00 level after the broader crypto market crash in the mid of 2021 from where the bulls became more muscular and made a new swing high at 231.70 level. Later on, the price showed a strong bearish pressure despite the spike from false news. In the most recent chart, the correction and multiple bearish candles below the dynamic 20 EMA increased the bearish pressure that found the bottom at 146.00 event level.

Currently, the price is facing support from the 146.00 level, where a bullish daily close is needed to rely on an upcoming buying pressure. In addition, the gap between the dynamic 20 EMA and the price also shows a sign of a bullish recovery as a mean reversion. However, the MACD Histogram shows another part of the market momentum where the Histogram is still bearish with new lows.

In this price context, a bullish daily close with intraday price confirmation is more likely to take the price up towards the 170.00 level. Conversely, any bearish daily close below the 146.00 level may need further attention to the price to see a bullish rejection from the 105.00 area. 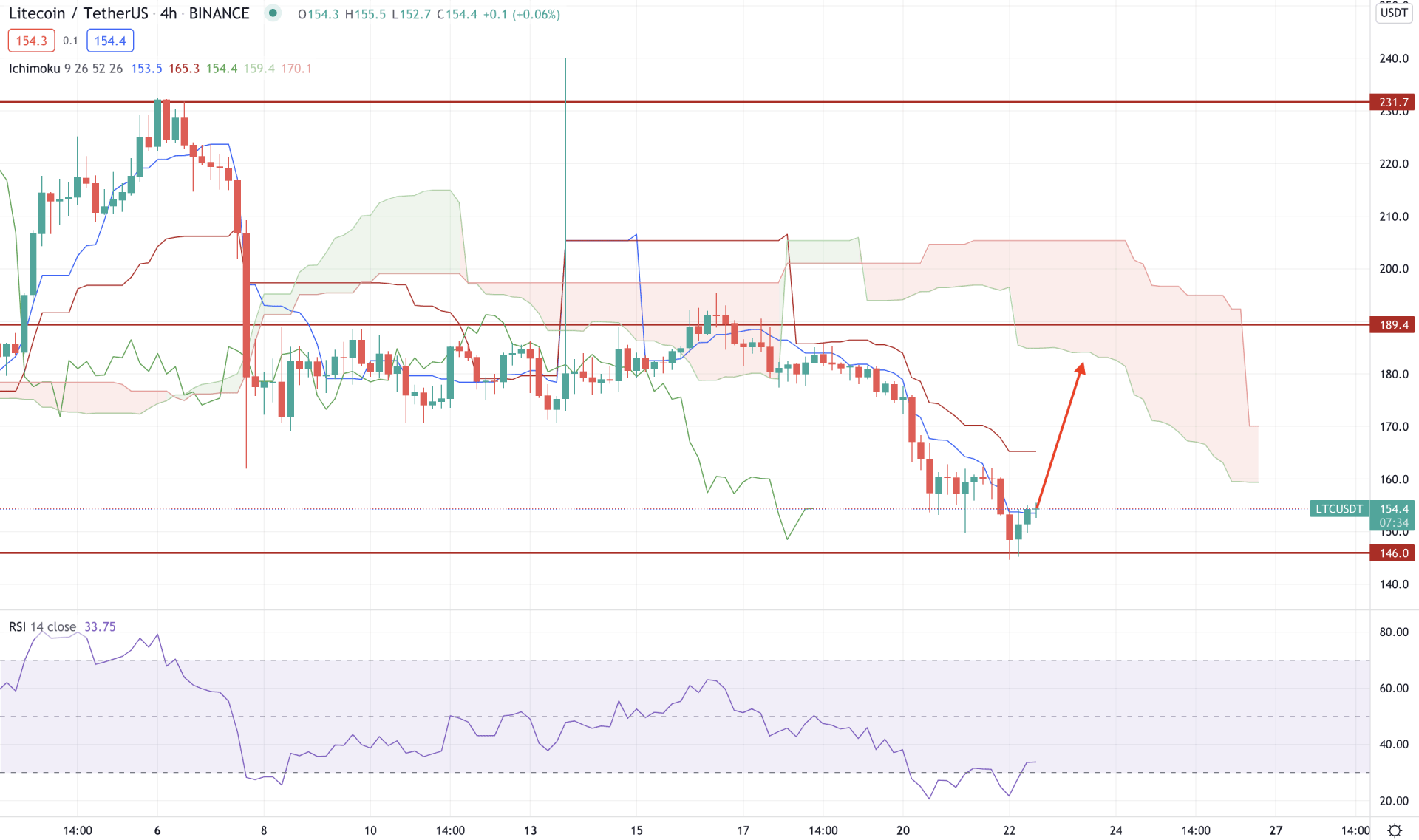 As per the Ichimoku Kinko Hyo on the H4 chart, the price has shown a primary sign of bullish recovery by moving above the dynamic Tenkan Sen while the gap between the price and Dynamic Kijun Sen has expanded. Meanwhile, the future cloud is neutral where Senkou Span A and Senkou Span B are moving parallel. In this situation, investors should wait for a flip into the future cloud to rely on the bullish movement.

In the indicator window, RSI has shown the bullish sign as there were multiple failures to stay below the oversold 30 levels. Overall, based on the H4 context, if the price moved above the most recent high of 165.00 level, followed by support from RSI, it may test the 189.40 cloud resistance from where a bearish pressure may come. On the other hand, any rebound from the dynamic Kijun Sen with a bearish H4 close may allow further downside pressure below the 146.00 level. 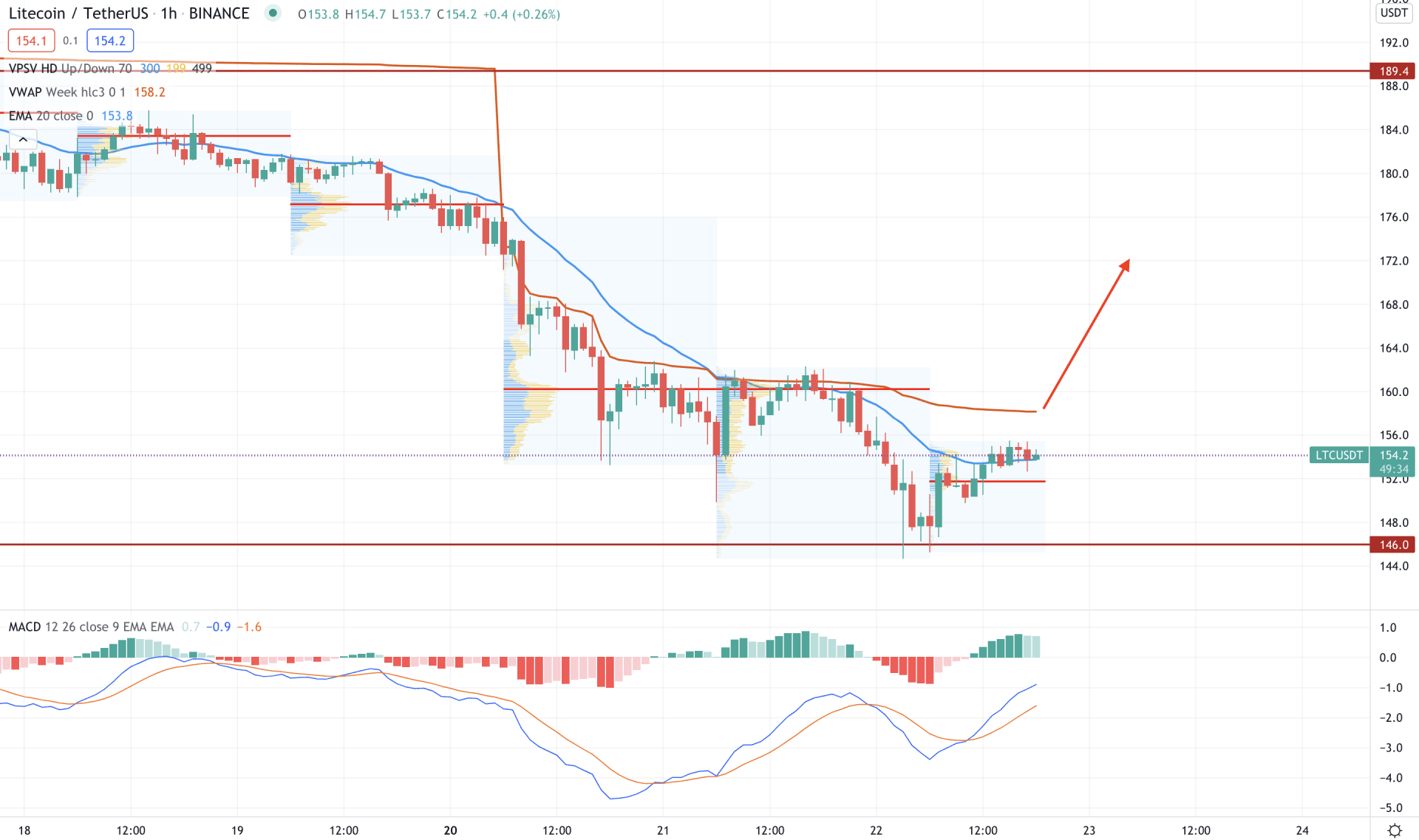 In the intraday chart, LTC/USDT is moving within a bearish trend where the current price is trading above the intraday high volume level of 151.80. Moreover, the price moved above the dynamic 20 EMA, which holds the price as support. In that case, any bullish H1 close above the weekly vwap may initiate a buying pressure towards the 180.00 area.

In the indicator window, MACD Histogram supports bulls where the PNP formation is in play with a corrective momentum. In that case, any new high in the positive Histogram with a bullish H1 close would take the price higher in the coming hours. On the other hand, a break below the 146.00 level would decrease the buying possibility where traders may have to wait for further buying signs in this pair.

Should You Try Selling LTC/USDT?

As of the above discussion, we can say that the LTTC/USDT has a possibility of showing a bullish correction if the daily candle closes bullish with a new swing high in the H4 chart. On the other hand, the overall structure is still bullish where a break below 146.00 level with an H4 close may invalidate the current possibility and take the price lower towards the 105.00 area.