GBPUSD is Stable Below the 1.40 Key Level – Can Sellers Make One More Push Down?

Central banks monetary policy from both the UK and the US made the GBPUSD price eventful. The most significant move of this pair came from the hawkish FOMC that led sellers with more than 300 pips gain. Now investors' sentiment was temporarily reprimanded from the UK’s GDP and focused on the new Delta plus Covid strain in Britain.

GBPUSD passed an eventful week with massive volatility and two-way businesses. However, the price remained within the range of 1.40 to 1.3850 that was broken today. After the Hawkish FOMC move, bulls tried to recover the price, but the corrective pullback was not enough to eliminate Powell’s tone. Moreover, Atlanta Pef President Raphael Bostic showed multiple upside surprises in the recent data point while the Dallas Fed Chief Robert Kaplan sees a rate hike in 2022.

The market sentiment awaits the UK’s Q1 GDP on Wednesday along with Monthly GDP and Current Account balance. Moreover, the UK final manufacturing PMI for June and the US ISM Manufacturing PMI would further indicate about this pair on the following week. However, based on the current price sentiment, bears are in control where the primary price target would be a 1.3680 support level. 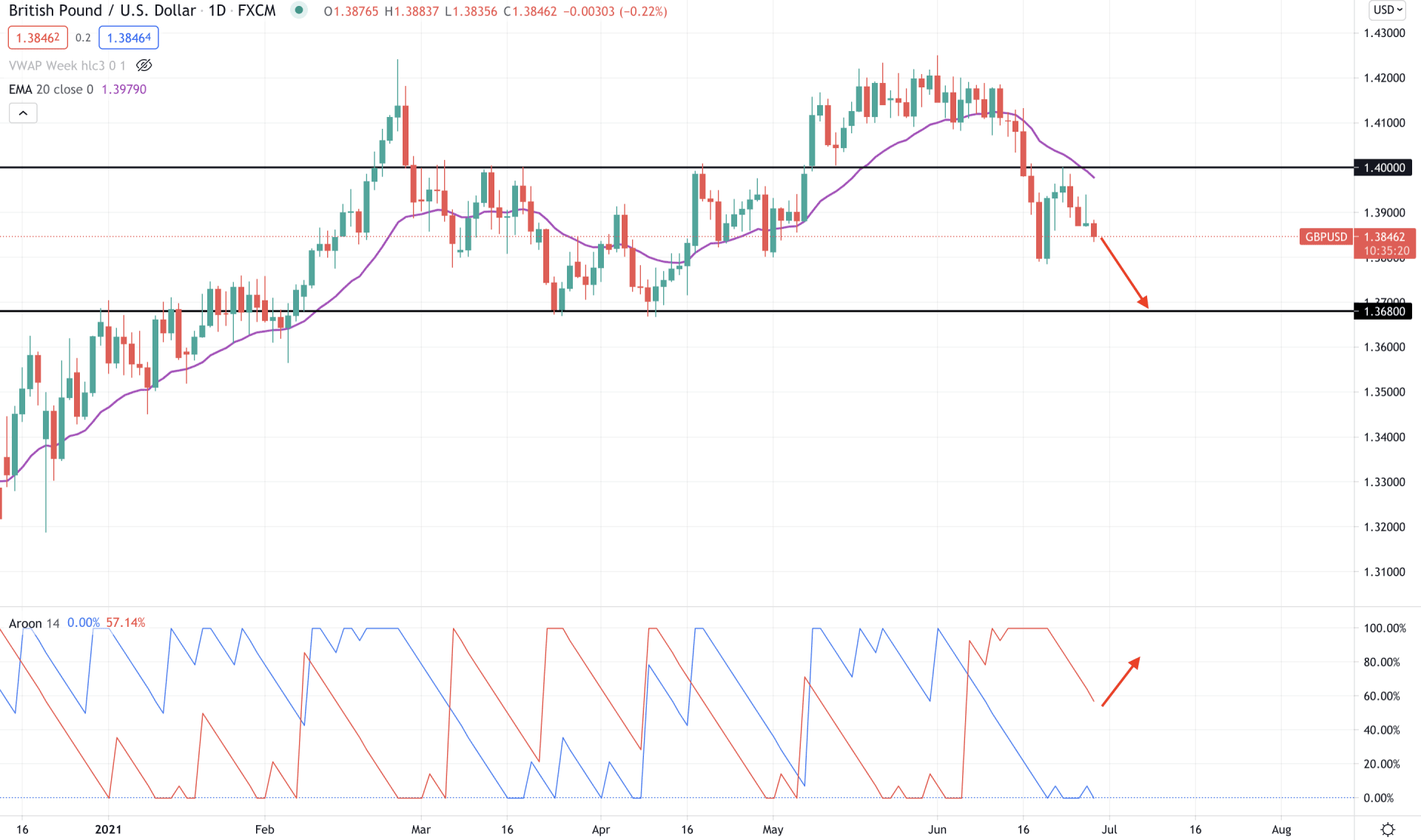 GBPUSD became volatile at the start of May and remained corrective at the 1.4200 area for more than two weeks. Later on, the bearish sentiment came from the Hawkish FOMC that made a massive breakdown of the price below the 1.400 level. Therefore, as long as the price is trading below the 1.40 key support level, it has a higher possibility of continuing the bearish pressure in the coming days.

In the above image, we can see that the price moved higher after breaking below the 1.40 key support level but with a corrective speed and rejected the level with a bearish daily close. In the meantime, the dynamic 20 EMA moved below the 1.40 level pushing more selling pressure to the price.

On the other hand, in the indicator window, Aroon Down (red line) is above the Aroon Up (blue line) and resides at the 60% level. Therefore, any upside pressure in the Aroon Down may initiate another bearish swing in the price.

Based on the daily price context, GBPUSD may come lower towards the 1.3680 support level in the coming days. However, a bearish rejection from the intraday support at the 1.3800 level may initiate a broader correction to the price. 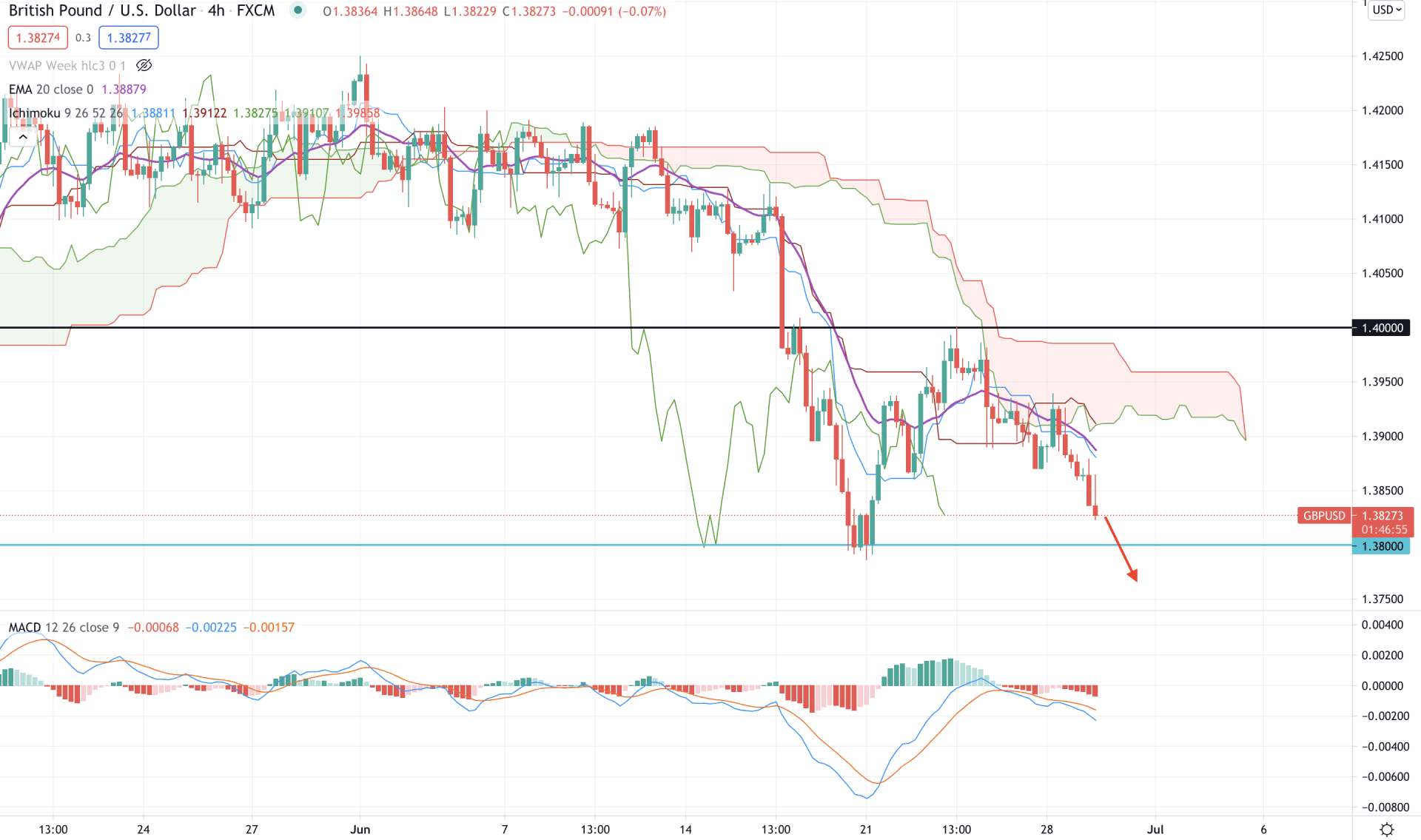 If we plot the Ichimoku Kinko Hyo in the H4 chart, we would see that the price is trading below the Kumo Cloud with massive selling pressure. On June 21, the price moved higher but failed to sustain the bullish pressure as soon as it showed a bearish H4 candle below the dynamic Kijun Sen. Moreover, in the future cloud, Senkou Span A is below the Senkou Span B and moving down.

The above image shows the H4 chart of GBPUSD where the price is moving down from the dynamic Kijun Sen and 20 EMA. Moreover, in MACD, the Histogram is bearish but the current price is above the 1.38 support level.

Therefore, any bullish rejection from the dynamic Kijun Sen may initiate a bearish pressure below the 1.38 level in the coming session. 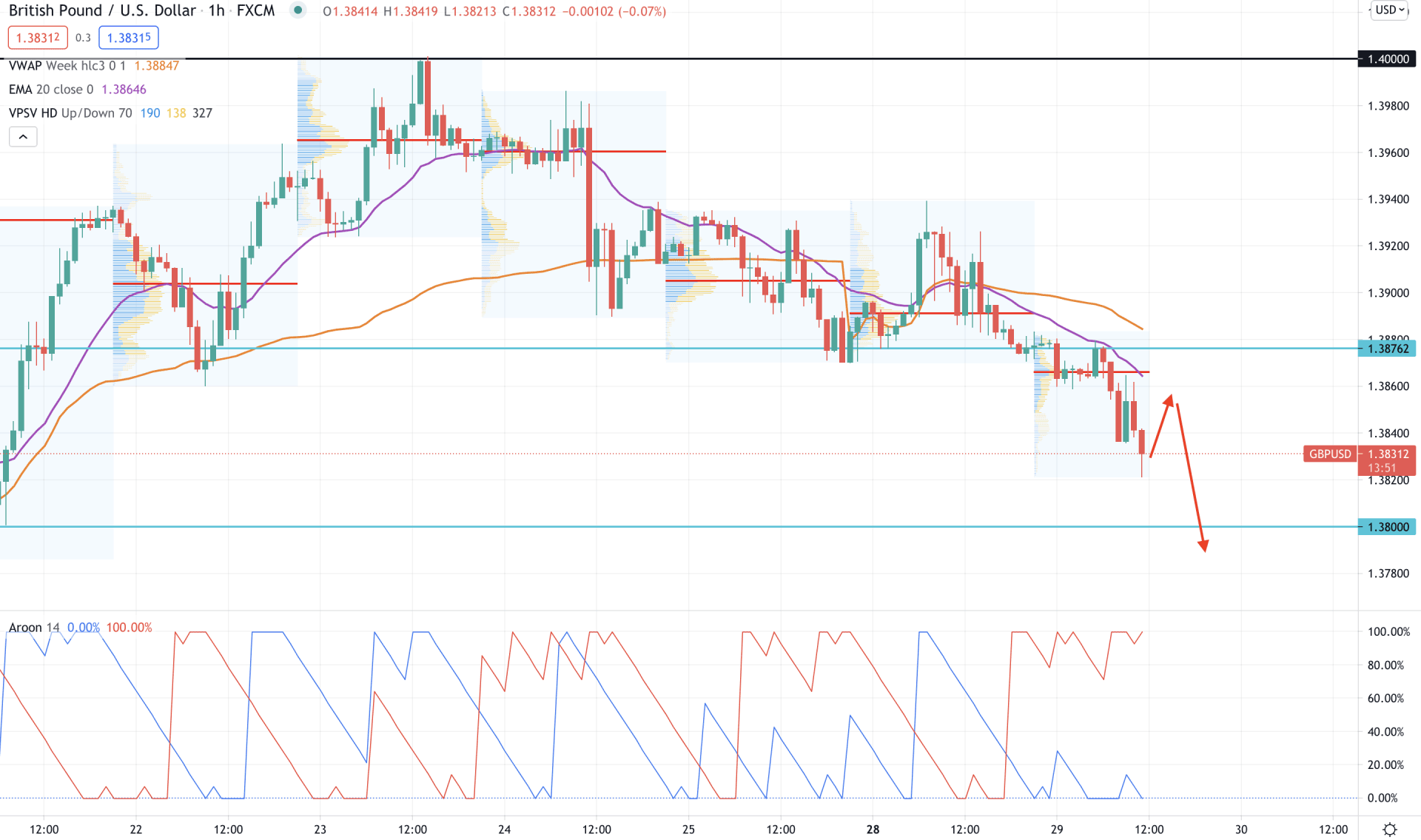 In the above image, we can see the H1 chart of GBPUSD, which is trading below the dynamic level of 20 EMA and weekly vwap. However, the most recent price created a gap between the price and dynamic level with a possibility of a bullish correction in the price.

In this context, the price may correct higher and any further bullish rejection from the dynamic 20 EMA may increase the bearish possibility in the coming sessions. On the other hand, a stable H1 close above the 1.3876 level may alter the current market structure.

Moreover, in the indicator window, Aroon Down is strong at residing at 100% area, indicating an extreme bearish pressure to the price.

Should You Try Selling GBPUSD?

As of the above discussion, we can say that GBPUSD can move lower towards the 1.3680 support level as long as the price is trading below the 1.3900 Kumo resistance level. However, the intraday chart is still bearish, where any rejection from the dynamic 20 EMA may take the price lower.

On the other hand, a stable H4 close above the 1.3900 level may invalidate the current bearish pressure. In that case, the price may move higher towards the 1.400 level.